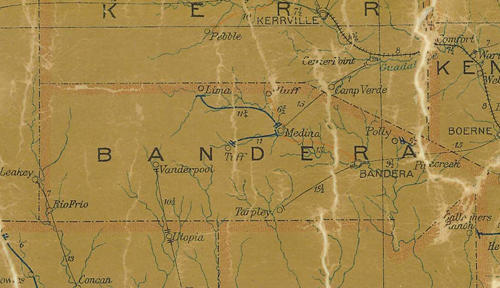 I joined Captain Jack Phillips Minute Company at Bandera in 1873, at the time of the organization of that company. We elected Jack Phillips as our captain, and Sam Jones as first lieutenant. I was made corporal. The State appraised our horses, and furnished our arms and ammunition, but we had to furnish our mounts and provisions. Our company was composed of the following men, all of whom are now dead, except myself and Andy Jones: Jack Phillips, Sam Jones, T. M . Stevens, J. I. Jones, Will Ross, F. L. Hicks, Jack Sheppard, Bill Hester, Sam Casey, Jim Davenport, John A. Jones, Jim Mckay, Joe Miller, Taylor Hester, Joel Casey, Jim Brown, John Clark, Monroe Moncur, Joe Click, Alex Hay, Jim Lewis, Joe Reed, Pete Weaver, Mack Weaver, Dave Weaver, A. G. Jones, Charlie Gersdorff, Jim Gobble, Dave Chipman, Laoma White.

This minute company was organized for protection against the Indians, and to put a stop to the cattle and horse stealing which had become very common in this country; the stealing being done by thieves who drifted in from other sections of the state. Indian raids at that time did not occur as often as formerly, but the redskins still came through occasionally. The last raid they made was in 1875, particulars of which will be given further on in this narrative.

Our first call was for ten men to scout out Indians. The second day out we jumped a big bear which took a tree. We ran up and Will Ross shot at the bear and missed it, but Will's gun was so near me that my face was powder burned. We got the bear, however, and Will had to guard the horses while we were in camp for being such a poor marksman. Finding no Indian sign, we returned home without accidentally getting shot.

In the spring of 1874 Indians stole some horses from parties around Bandera. Captain Phillips and his men followed them out near the head of the Medina river to the headwaters of the Frio. There the Indians met another band of the red devils, who had been in camp several days at a fine spring which gushed out of a buff of a mountain, which location afforded them an ideal lookout, as a splendid view of the whole surrounding country was obtained. Their spies had evidently seen us a long time before we reached there, for we never overtook them, although we followed their trail to the Nueces. In 1884 W. P. W. Holmes and myself located a cow ranch at this place where the fine spring was found.

Along in 1873 and 1874 Bandera county was overrun with some bad hombres, who were known to be cattle rustlers. Captain Phillips decided to break up some of their devilment. Four or five of these rustlers rounded up a herd of cattle along the Medina river above Bandera and started them west. We followed them and overtook the herd about where Leakey now stands, and we rounded up both cattle and men. They offered but little resistance, and it being late in the afternoon. we went into camp for the night, Captain Phillips detailing some of his men to guard the prisoners. We had camped near a ranch, and while we were cooking supper a kind lady named McDougal, sent word that if any of our men would come over to the ranch she would cook supper for them. One of the prisoners, a man named Nichols, asked Captain Phillips if he could go over there and get supper if his guard accompanied him, and F. L. Hicks was detailed to go with him. Mr. Hicks consented but said, "I'll take you over there and I'll bring you back." But he never brought him back. When they went in and sat down at the supper table, Hicks left his gun near the door, Nichols seating himself nearer the door than Hicks. While Mr. Hicks was biding the good things set before him, Nichols grabbed the gun and jumped for the door, and once outside he made a run for the brush. Mr. Hicks jumped up, knocking part of the dishes off of the table and turned over the bench on which he had been sitting, and dashed in pursuit, leaving his hat. It was too dark outside to see the prisoner, so he returned to camp and reported the escape. The joke was on Hicks, and we had lots of fun over the incident. We did not care if all the prisoners got away, just so we got the cows back home. Next morning we started for Bandera, and on reaching there we delivered the other prisoners to the sheriff and turned the cattle loose on their range.

In the summer of 1874 we captured a young man named Waldroop on the river near where the town of Medina is now located. He was accused of finding ropes with horses at one end. There were also others accused of similar crimes, and we took them to San Saba where they were wanted, and turned them over to the officers at that place. A little brokeback man by the name of Ace Brown, evidently the alcalde of the town, ordered the prisoners put in a hole in the ground, about 10x10 feet which served as a jail. Guards were placed around this sweat hole to keep the inmates from escaping. And there we left them, and as we bade them farewell I could see the beads of perspiration standing out on their faces. I heard afterwards that these fellows left that hole one night and got away. I was glad of it.

We were disbanded in the spring of 1875, and the following winter Capt. Jack Phillips was killed by Indians at Seco Pass, in the western part of Bandera County. Mr. Phillips lived several miles above Bandera on Winan's Creek, and had started over to Sabinal Canyon on some business for his brother in law, Buck Hamilton, who was then sheriff of Bandera county. There was no wagon road over the mountains, but just a horse trail. Mr. Phillips ate dinner with M C. Click, on the Hondo, and when he arrived at the Pass which leads into the Seco Canyon he was attacked by Indians. Some time previously F. L.Hicks had built a pasture fence across the trail and in lieu of a gate had provided common draw bars through which to pass. Mr. Phillips had passed through this when the Indians made the attack upon him. He ran back the way he came and succeeded in getting through the bars again, but was pursued for about half a mile. His horse was shot through the shoulder and fell into a ravine. Mr. Phillips took down the ravine on foot, but was soon overtaken and killed. While all this was taking place, William Felts and Miss Josephine Durban were on their way from Sabinal Canyon to Bandera to get married, and came upon the body of Mr. Phillips shortly after the Indians left. They first saw the disabled horse, which was lying in sight of the trail, and went to him. Here they discovered the tracks of Mr Phillips, where he ran down the ravine, and following these about fifty yards, they found him lying face downward. They hurried to the ranch of Mr. Click, told him the news, and stayed at this house that night. Next morning Mr.Click, Mr. Weaver, and others went after the body and Felt and Miss Durban came on to Bandera and brought the news over here. When Mr. Click and his party arrived at the scene of the killing, the horse was still alive but unable to get up and was shot by Dave Weaver. The body of Jack Phillips lay face downward, and was stripped and mutilated. The Indians had taken the saddle off the horse and carried it away. The body was taken to Joel Casey's, the nearest Hondo settler, and Mr. Click came to Bandera that night and had a coffin made, and the next day the remains of Mr. Phillips were brought to Bandera and buried with Masonic honors.

Click here to get your 6 hard copy FRONTIER TIMES MAGAZINES