AN EPISODE OF RECONSTRUCTION DAYS 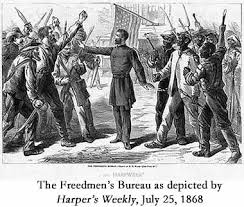 IN 1886, I LIVED on a ranch in Goliad county about 10 miles from Goliad. At the time the country was occupied by U. S. soldiers and there was considerable friction between citizens and negro troops stationed in that locality.

One morning my mother and stepfather started to Goliad in an ambulance. I was standing on the front porch to see them off, when they stopped a short distance from the house and called me. When I went to them my step-father told me to go to the house and have the negro man saddle the dun horse that was in the stable and for me to ride it down, as he had a horse trade on hand.

When I arrived with the horse, he made an exchange with a man he was talking to, for a much better horse which seemed to be tired out. I was instructed to know nothing except that he had made a good horse trade. I rode the new horse back to the house and turned him into the pasture. When they returned that evening I was told the circumstances, with instructions to make no reference to it to anyone.

The man traded with was an acquaintance of my step-father and a member of a prominent family in the county (I do not remember his name). His brother had gotten into a dispute with some negro soldiers and a negro sergeant had shot and killed him. The country being under martial law, the negro was not arrested. The brother, meeting the sergeant shortly afterwards, had killed him. Being chased and his horse played out, he took the chance above described. Late that night, after my parents had returned, I was again called upon to co-operate. We had a spare bedroom which was generally kept locked, and was used for emergency company and partly for storage. My younger brother was sent to bed and when the servants had left the house and gone to their quarters in an out-building, the fugitive was met in a thicket in front of the house. I was left in charge of his horse and he was conducted to the spare room. I then turned the horse loose and gave him a slap. He ran to the barn and of course everyone except we children who were supposed to be in bed, turned out, very much surprised at his return. The horse was unsaddled and turned into the pasture and it was surmised that he had gotten away from the owner and come home. Our visitor stayed a week or two and no other member of the household had a suspicion of his presence. All his wants were attended to by us when the coast was clear and the door was always kept locked.

Late in the evening when the others had gone to bed. he would come out and sit on the porch and I was generally allowed to be present and enjoyed the discussions of existing conditions.

We made a practice of using his horse frequently, so that his presence in the barn would not attract attention and one moonlit night after the excitement of the hunt had abated, the fugitive rode off and made his way to Mexico and safety.