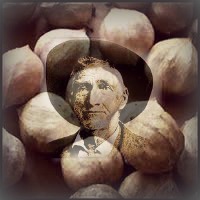 Yesterday, in San Antonio, I was standing on a street corner talking to a man from Mineral Wells. On the other side of the street was an old man waiting for a chance to cross the street. Once he was a young hero and often placed his life between the Indians and the homes of the early settlers of this section of the state. Today he is aged, grey, wears glasses and depends on a cane, but cars do not stop and give him a salute as they would Gen. Pershing. At last through the stream of swift-moving automobiles he sees a break and crosses over. As I met him he said in that winning, gentle voice of his, “Ah, my friend, I am glad to see you, I thought I would take a stroll up this way as a little exercise is good for me and I am on my way to town.” Then I said to him; “Captain Smith, this is my friend Dalton, who told me that his father was murdered by the Comanches as he was returning from a drive of cattle to Kansas City, within a few miles of home.”

Capt. Smith seemed to brighten up and began to relate some of the stirring things of his early days. He told of driving a herd of 500 wild cattle through the village of San Antonio and up to Leon Springs without the loss of one. A lady gave him a suit of clothes made from the cloth her mother wove, as an inducement to get him to drive the cattle. He also told this story of meeting with Bigfoot Wallace, which I give in his own language, as nearly as possible:

“When Texas was a young state in the 60’s and I was 15 years of age, we were living out about where Somerset is now, on a farm and as most of the men were in the army during the civil war, the defense of the home depended mostly on boys. The Comanche Indians made frequent raids into our section of the state coming down the Frio and Medina rivers during the full moon and stole and drove off our horses and often they would massacre men, women and children.

“On this particular occasion I got all the boys that I could together and we scouted up the country in search of Indian signs and camped on the Chicon, 20 miles from Castroville. We had killed a maverick and were getting supper ready when Bigfoot Wallace came along, as he always did on such occasions, and took a hand in the proceedings. Many of the boys that were in this company were 14 years of age. After supper Bigfoot Wallace asked me who was in command of the outfit. I told him no one, that we just got together and started out to find some Indians. “Well,” he said, “you must be captain.’ I said, ‘Oh no!’ But he insisted and told the boys they ought to elect me captain and so they put it to a vote and I was elected captain and we organized a company of rangers there and then.

“Wallace told me that we ought to have a pack mule to take our things along and that there was one over there I might have it if we would go and get it. So we started out and hunted all day but never saw a sign of the mule. When we came in I told him about it and he said, ‘Well, I wanted you to have that mule. It belongs to Capt. Sam Lytle. He killed my dogs and I wanted to get even with him by giving you that mule.’ ‘No,’ I said, ‘you don’t; give me another man’s mule, I don’t want him.’

“After we had eaten our supper Bigfoot Wallace told us this experience he had with the Indians: ‘One evening I rode up to my shack as usual and tied my horse to the door and left the dogs outside with him and shut up everything tight and snug. Sometime during the night I heard the dogs whining and they kept it up. They could scent an Indian half a mile away and I knew something was wrong or they would not keep whining. I slipped over to the door and opened the portholes and looked out but could not see anyone or anything, but I was satisfied that there were some Indians around somewhere. I closed the porthole and went to moulding bullets for dear life. When daylight came I cautiously opened the door and looked out in every direction but saw nothing. Then I took my gun and buckled on my revolvers and went around the shack and down by the corral and found that all my horses were gone. The Indians had taken up four posts at the back side of the corral and cut the rawhide and let out all the horses and driven them away. I followed their trail a mile until I came to a mot of hickory and some distance away I saw a smoke. The ground where l was standing was covered with hickory nuts and I stooped and began filling my breeches and shirt with hickory nuts two or three inches thick all around my body. I was a sight and looked like a giant—could hardly waddle along. There was an old log lying near by and I led my horse up to it and managed to crawl through the high grass. When I came within good shooting distance I sorta raised up and saw two big bucks standing up and all the rest were down around the fire cooking their breakfast. I raised my old smooth bore rifle and drew a bead on the biggest of the two and let him have it. He jumped up in the air and yelled and he fell dead. I loaded me again while the whole bunch yelled and grabbed their bows and arrows. They tried to locate me, but they did not see the smoke in the grass. I raised up again and let the biggest one have the next shot and they saw the smoke and began circling around and shooting at me. I straightened up and pulled my two revolvers and they kept up a running fight. They must have shot a hundred arrows at me but they would strike the hickory nuts and bounce off. They must have thought I was the devil, for as soon as they had tied the two Indians on the horses they broke away and did not take a single one of my horses.’ ”