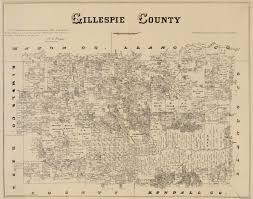 WIDOWED BY A mob of lynching whites, deprived of her home soon after by the discovery that it had been sold to her family fraudulently, left destitute with seven children to support and rear—these were some of the tragedies experienced by Mrs. Clara Feller, the period to whose 97 years of life was written at Fredericksburg recently.

Mrs. Feller was the last of the genuine pioneers of the German Hill Country whose memory spanned the whole range of its history—the hardships of carving homes out of none too plastic clay, of cholera epidemics, of harassments by Indians, of the bitterness of the Civil War wherein Germans staunchly opposed to slavery, set down on the border of the Confederacy were massacred and lynched by whites too busy as border ruffians to fight for what they professed at the front, and finally of peace in the secluded valleys of Gillespie County.

The big tragedy of Mrs. Fellers life occurred in 1863, 13 years after her marriage to William Feller. Mrs.Feller was 18 when she married. The young couple had bought 200 acres of land on Dry Creek for $400, and through the years before the outbreak of the Civil War had paid for it. Her husband had become a justice of the peace, and as such was a man of importance in their immediate neighborhood. There were seven children, the oldest 12 at the time their contentment was ended.

During the years when the family was paying for its home, the States of their homeland were rushing closer and closer to civil war, and finally it broke. The German settlements had no common economic interest with the Confederacy. Their social organization was founded on hard labor for everyone and there was no place for an aristocracy founded on the sweat of serfs. Besides, there was a tradition of political liberalism in their settlements because liberalism had made it necessary for many of them to quit their old homes and come to Texas. Almost to a man they were ardent foes of slavery.

As the war wore on, San Antonio became the headquarters of Southern slackers and hiders-out, in reality ruffians, posing as ardent agents of the Confederacy. They were the standing proof that "war hath no fury like the non-combatant." Some of them insinuated themselves into the confidence of authorities, and not a few of them were armed with commissions, the genuineness of which never has been settled.

Meanwhile the Indians' road to plunder was opened by the war. They renewed their harassments. The German communities formed armed organizations to protect the settlements against the red men. Their action was misunderstood, and martial law was declared by the State government in the counties occupied by Germans. Beset by white and red, many of the settlers began to think of moving again, this time to Mexico. Sixty-one of them, poorly armed, started overland for Mexico. They were betrayed, and on July 10, 1862, on the Nueces River, were overtaken by bushwhackers and all were massacred.

The Crime shocked the German settlers who remained at home. There was no more outspoken denouncers of the massacre than Feller. All along he had been an opponent of secession, and the massacre was the last straw.

What happened to him is told by his widow in "German Pioneers in Texas," compiled for the Fredericksburg Wochenblatt and Fredericksburg Standard and copyrighted by Don H.Biggers, 1925. She says:

"My husband was a staunch opponent of slavery and did not hesitate to express his views on the subject. He was also free in his denunciation of various outrages that had been committed by armed mobs claiming to be State officials. Particularly had he criticized the Nueces butchery. He had been warned and threatened, and being a justice of the peace at the time was of some prominence and some importance in our immediate neighborhood.

"The Indians never caused any real trouble until the War Between the States started. Then they became an ever present danger. My husband and others had spent the day scouting for some Indians reported as having been seen in the vicinity. He had returned late in the evening, had set his gun aside and we were at the supper table when a bunch of men rode up and asked if William Feller lived there and if he was at home. My husband got up from the table and told them his name was Feller.

"`Allright,' replied the leader,`you are under arrest.'

"`What for and where is your warrant’ Mr. Feller inquired.

"`Never mind about the warrant, and you'll find out what for when you reach the place to which we are taking you,' was the reply."

By this time they had entered the house and taken hold of my husband.

"I was too dumbfounded with terror to know what it meant, and resolved to make a desperate effort to render my husband all possible aid or at least to enable him to defend himself. I managed to get to the place where Mr.Feller had placed his pistol, put it under my apron and was going to give it to him. One of the men saw what I was doing, grabbed my arm and wrenched the pistol out of my hand. I then begged and pleaded that I be allowed to go with my husband, but he insisted that I stay with the children, vainly endeavoring to assure us that everything would be all right, kissed each of us and rode away, surrounded by his captors. That was the last time I ever saw him alive.

"Late that night I received word that Mr. Peter Burg had been shot through the back and killed, and that my husband and two other men, a Mr.Blank and a Mr. Kirchner, had been hanged from the limb of a tree not very far from home."

"I have never harbored hatred on account of these crimes," she said. "They were the tragedies of war."

And the final comment was: “Women and children always suffer most when men indulge in hate and go out to fight."

But Mrs. Fellers cup of despair was not yet full. Soon after, she discovered that the home she thought was hers belonged to someone else. They had bought it from a land-shark who had never owned it and the true owner appeared. He demanded $300 for the land. Mrs. Feller did not have it, so packed up the seven children and went to Fredericksburg.

"All I had," she said, "was my family of babies, the oldest one not 13, a few household goods and a past due note for less than a hundred dollars left me by my father. Mr. Emil Wahrmund Sr., gave me $100 for this note, which was really more than the note, including interest, amounted to. I don't know whether the maker of the note ever paid it or not. I only know that Mr. Wahrmund never said anything to me about it.

"With that hundred dollars I bought this house (the house in which she died). Here I have lived ever since educating and caring for my children as best I could, and I am not ashamed of the job."