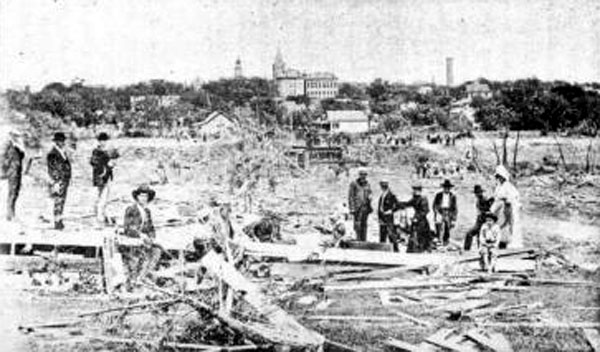 [Due to approaching tornado season in Texas, we thought the following account, from J. Marvin Hunter's Frontier Times, August, 1932 would be of interest]

THIRTY-SIX YEARS ago a tornado in many respects unparalleled in cyclonic history swept through Sherman, killing fifty-six persons out-right, fatally mangling ten others, sending fifty-eight more to hospitals and maiming scores who were cared for in private homes.

For several days the meteorological conditions had been favorable to cyclonic development—unusual humidity, variable winds of freaky fickleness and force, very high daily temperature, remarkably cool nights and a persistently low barometer. From noon until 4:15 p.m. when the storm struck Sherman, there was a stifling atmospheric condition that made breathing difficult. At the signal station the barometer stood at the danger point. Immediately preceding the onslaught of the tornado there was a heavy downpour of rain.

The tornado originated in a cloud about twenty miles southwest of Sherman. The tornado funnel wormed its way out of the lower edge of this earth, apparently feeling its way, reminding the observer of a huge elephant's trunk in search of food.

During the formation of the parent, cloud in the southwest another cloud was moving toward it from the northwest. Between these two clouds there was a magnificent electrical display in a greenish cloudbank along the western horizon. With spectacular vividness sheet lightning kept the heavens illuminated, during which time frequent fiery zigzag bolts of intense brightness flashed down into the earth.

About five miles southwest of the city the second cloud dashed into the tornado's face as if it would devour the aerial monster. For one minute there was an absolute pause in the funnel's movement. The two colossal wind-demons were in a contest for supremacy. Two hundred yards above the earth clouds rolled upon clouds with appalling hisses and groanings. Long ghoulish arms of sooty blackness shot out into the surrounding atmosphere, their ragged fingers seeming to clutch at everything. within their reach. Objects that had been sucked into the vortex now whirled and tumbled and spun as if a dozen voices were juggling in them.

It is easy to exaggerate the force and velocity of a storm that is shaking the life out of you over an open grave. Various estimates gave the progressive movement of the storm a velocity of 70 to 100 miles per hour. The vortical velocity, determined by the regular recurrence of certain sounds in the whirl of the funnel, was estimated at 500 miles per hour. These estimates were only opinions without positive and definite means of proof. But the tremendous force made obvious from objects driven through trees or lifted through the air indicate an inconceivable velocity. An hour after leaving Sherman and rising into the air the funnel dipped and reappeared as a tornado in Oklahoma.

South of the town a stone weighing 500 pounds was carried 225 feet. A piece of marble two feet long from a monument was found a mile north of the shaft from which it was broken. A sawed scantling was driven through the heart of a tree. A reliable citizen declares that stones weighing 250 pounds each were lifted out of the creeks and hurled into his farm. These stones contained iron ore. A piece of iron weighing 200 pounds wa s found more than 300 feet South of the place where it had lain. A piece of iron from Houston street bridge weighing 200 pounds was carried 250 feet and driven several feet into the ground. The massive irons from the Houston street bridge were snatched from their supporting columns and twisted into fantastic shapes as if they had been straws.

From a side view of the cloud it was smoky black. From a front view it. was a bright copper color that shaded into black at the sides. A young woman who was caught up and carried several hundred feet described the interior of the funnel as a hollow cylinder whose walls were of the dazzling brightness of polished copper in intense illumination.

Mary Nash Institute and North Texas Female College, just across the street from each other, were in direct line with the path of the storm. A rumor had gone abroad that these institutions had been demolished. In these colleges were at least. 400 girls. Throughout the night after the tornado and all next day parents from a distance thronged each campus seeking information. When it was found that all were safe, strong men stood irk speechless gratitude while their daughters clung to them and wept for joy.

Every tornado has its freak incidents, many of which test the credulity of persons who only hear about them but never see them. This one perpetrated its share to hold its own with all others. A ball of fire was seen in the wake of the funnel. Vegetation sieemed to have been scorched. Leaves crumbling in the fingers like those of December, in some instances when rubbed between the hands.

The storm manifested a peculiar fondness for metallic substances. Circular iron bands around flower pots were taken away while the flowers were not damaged. Wagon tires were wrung from wheels and twisted into odd shapes. The funnel bounded from a bluff over a valley, leaving a field of young corn unhurt in the creek bottom.

A splinter was driven through six cans of concentrated lye. A piano was found covered with a carpet and still in good tune. A dead snake was wrapped many times around the limb of a surviving tree.

A trunk top was found thirty-five miles north of Sherman bearing the owner's name. A cabinet phonograph was picked up thirty miles away. A platform scales was drawn out of its bearings and strewn along the ground. A doctor was caught up and whirled in the storm. When he went up he had silver in his pockets. When he came down he had neither silver nor pockets. Next day a friend brought in a vehicle wheel. It was all that was left of the doctor's buggy. His horse was found half a mile away stripped of his harness. A rural teacher's voucher was picked up thirty miles north. A woman had two metallic milk coolers at the end of twenty foot ropes in a well. The coolers were drawn out and carried away, while the ropes were beaten to a frazzle on the ground at the well.

The tornado vortex that drew everything within its reach into its greedy maw blew the hearts of men together. That one touch of nature that makes the whole world kin elicited sympathies that were swiftly translated into helpful action. The living suffered the agonies of the dying. Merchants forgot their merchandise. Clerks abandoned their counters. Professional men rushed from their offices. Into the scene of death and devastation swift. moving feet carried willing hands. Caste and class disappeared.

For almost a week, with hasty meals and little sleep, every physician in the city was ceaselessly active. Physicians from other towns came nobly to the aid of local doctors and surgeons. A Sherman citizen received from the Weather Bureau in Washington a blank containing many questions concerning the storm and these were supplemented by a special request for a report of his own personal observations. In reply he stated that at the time for making observations he was running so fast that he had no opportunity for making observations of scientific value.