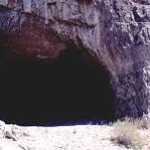 Jap Brown, a man by the name of Star, a Mr. Hitchcock, the Pierces and one or two others whose names cannot be recalled, formed a little colony or neighborhood on the Blanco river in Blanco county. They were a simple folk, quiet, unobtrusive and, like all Texans of the olden time, were noted for their generous hospitality. They cultivated small farms, lived in cedar log cabins and devoted much of their time to making cedar shingles and cutting cedar posts which they hauled to Austin where these articles always found a ready market. Jap Brown, who will prove the leading character in this story, was a noted bee hunter and devoted much of his time to the pursuit of bees and the gathering of wild honey from bee caves which abounded in the cliffs and canyons of the Blanco streams, and while following this calling, he acquired a thorough knowledge of every mountain path, every nook, recess and cavern in all the region thereabouts, and, as the sequel will show, this knowledge proved of great service to him during the Civil War. About one mile from Brown's house there was a large cave, the small entrance to which opened out in the walls of the cliff, or rather a precipice some 50 to 60 feet above the floor of a canyon through which flowed the Blanco river. The entrance to this cavern could not be seen from the crest of the cliff and was scarcely observable from the bottom of the canyon or any other point of view.

When the war came on, Jap Brown and the parties named refused to go into the army as volunteers. They kept their own counsel, refused to discuss the question of secession with outsiders, and pursued the even tenor of their way until the conscript law went into force. One or two of these men were forced into the ranks, but Brown and one other decided that freedom even in cavernous depths of the Blanco mountains was preferable to the life of a conscript and in pursuance of that decision, they sought and found refuge in places of concealment almost within earshot of their homes. While many Unionists and Neutrals in that and other sections, fled to Mexico, it was known to the authorities that Jap Brown was in hiding somewhere in the mountains near his home, and for more than three years, conscript officers and Home Guards, known in that day as "Heel Flies," made their monthly and often weekly "roundup" in that section, trying to find and arrest Jap Brown. They searched his house over and often they explored and beat up in the brush in every canyon, on every hillside and mountain top for miles around but they could never find even a trace of Brown, and yet they knew that the object of their search was somewhere in concealment. All this while Brown and his companion were in the aforementioned cave, and could look down-unobserved upon the cavalcade of Heel-Flies as they rode through the canyon in quest of their quarry.

The families of these men had formulated a code of signals which each member understood perfectly, and at the slightest approach of danger, every member of the community was warned. Thus, when an officer, with a company of men, or a stranger came into the settlement, the signal was given. From this cavern perch, Brown had full view of a neighbor's house and yard, down in the little valley. When he glanced out and saw a white garment on the clothes line, he knew that it was the danger signal. But with all these precautions on several occasions their capture came near being affected. Old Grandma Pierce was chosen to carry provisions, occasionally, to Brown. The old man usually performed this service under cover of darkness but there came a period when the "Heel-Flies" seemed to relax their vigilance and this caused him to assume a boldness that came near being the undoing of Mr. Brown. His good old wife, Grandma Pierce, was of a very superstitious turn of mind and one day she had prepared a supply of rations including a pot of coffee, all to be carried to Brown's cave by the old man. It was about one o'clock when he placed the provisions in a basket preparatory to starting, and as he went to take up the coffee pot, the old lady begged him to leave it alone "I see death in that coffee-pot and in that basket!" cried the old mother. "Don't touch that coffee pot and don't take that basket, if you do we will be betrayed!" Probably the old matron had seen one of the many danger signals and was forewarned, as to that, no one knows, but her spouse heeded her warning and with the provisions—corn pone and jerked beef—concealed under his shirt, inside, he set forth from the house with a long walking-stick in one hand and a few ears of corn in the basket. He went in the direction of the cave, half bent with age and decrepitude, leaning on his staff and all the while calling hogs, which, in reality, was a signal that Brown understood. When he had covered about half the distance between the house and the cave he found himself suddenly surrounded by twenty-five Home Guards who demanded to know where he was going. "I am hunting my old bell sow; have you fellers seen an old spotted sow with a bell on" was the ready response of the old pioneer. After some further questioning, the old man was permitted to proceed in quest of his "old belled sow," but he did not go further in the direction of the cave. Old Grandmother Pierce always afterward contended that if he had taken the coffee pot along his bell sow story would not have been accepted by the “Heel-Flies." They would have reasoned that hogs do not drink coffee.

Mrs. Brown was a thrifty woman, industrious and withal, a most resourceful lady. She cultivated the little farm, made good crops, her premises swarmed with poultry, she carded, spun and made clothing for herself and children, and all during the war she seemed prosperous. Her field was a little way off the road but in full view and passers by often saw her following the plow. Her table was always well supplied and she often fed the very men who were scouring the country in search of her husband and on these occasions, from his aerie in the cliff-side, he read the signal that told him of the presence and even the number of his persecutors.

But Mrs. Brown did not do all the plowing and planting on that little farm A lady who knew the Browns, Pierces, and Hitchcock's intimately during those times and who now lives in San Antonio relates the following incident in connection with this story: "I passed a certain sheep ranch one day and saw Mrs. Jap Brown, with other women, shearing sheep. An hour later I passed the Brown place and when I came in sight of the field I was surprised to see Mrs. Brown in the field plowing. Of course, it was not Mrs. Brown, since she was three or four miles away shearing sheep. It was Jap Brown clad in his wife's attire. He was often seen by near neighbors, plowing in the field dressed up in women's apparel".

John C. Pierce was Brown's constant companion in hiding and the year before the war closed Pierce had the hardihood to venture forth from their cave and get married.

After the close of the war, the fact was revealed that these men were not idle while mewed up in that cave. Cotton and wool cards and a spinning wheel became a part of their cavern furniture, tallow candles cast in old time candle molds by the good wife at home afforded light for them and the vast amount of spun thread carried from the cave under cover of darkness was a prime factor in causing people to wonder how it was that Mrs. Brown made more cloth than any two women in the country. During the early days many boys were taught to card and spin.

Jap Brown remained on his little farm and prospered for several years after the war. At length he became involved in a feud and was killed while crossing the Colorado river at Austin.