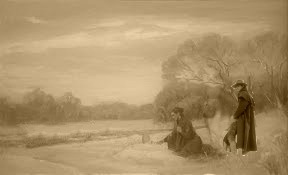 As Texans we cherish no prouder boast than the purity of Texan womanhood and the Patriotism of Texas manhood. These were the virtues of the early pioneers, and no praise would be complete without reference to the brave wives, mothers and daughters of those who erected homes along the borders of Texas and braved all the dangers incident to frontier life. During those early days in Texas there was always war and rumors of war—war that filled the breast of man with exultation, and woman's eyes with tears and, oh, the bitterness of it all for Texan mothers, wives and sweethearts— always giving up the best beloved, always the anguish at parting and so seldom the joy of home-coming. Well is their story told in the lines of the Irish poet:

In vain the laughing girl will lean
To greet her lover with love-lit eyes;
Down in some treacherous black ravine,
Clutching his gun, the dead boy lies.
And many a moon and sun will see
The lingering, wistful children wait
To climb upon their father's knee;
And in each house made desolate.
Pale women who have lost their lord
Will kiss the relics of the slain —
Some faded garment—some sword
Poor toys to soothe such anguish pain.
What profit now that we have bound
The whole world round with nets of gold,
If hidden in our hearts is found
The care that groweth never old?

No trail of blood along the Texas border appeals more touchingly to the soul than that left by the little child of Mr. and Mrs. William Spraggins near Comanche seventy years ago.

Mrs. Spraggins was a beautiful woman and was endowed with all those noble traits of character that were natural attributes of Texas womanhood of that remote period. That courage of the young wife and her devotion to her husband, which prompted her to follow him to the extreme border of Texas. in order that they might erect a home and enjoy the fruits of long years of toil and vigilance, are among the commendable characteristics of Texas motherhood and will always excite the admiration of the world, while the ultimate sorrow of this brave woman will enlist the sympathies of mankind wherever the story of her grief is told.

Mr. and Mrs. Spraggins settled in Comanche county, then a border region, early in the 1870s, and from a Comanche paper dated October 18, 1879, we copy the following pathetic story of the lost child:

"The most pitiful and heart-rending affair that has occurred in this county took place last week several miles south of town on the Brushy Gap road. On Wednesday morning (October 8, 1879) Mrs. Spraggins left the house to get some water at the spring several hundred yards distant, leaving her little child, only 21 months old, at the house. Upon her return to the house she missed the child and could not find it. She searched everywhere but in vain. The neighborhood was aroused, and the fact was soon made evident by the little footprints in the path that the child had attempted to follow its mother to the spring and had become bewildered and lost. The whole neighborhood became aroused and a thorough search commenced. Again was the trail lost and found and every moment they expected to find the little fugitive, but were doomed to disappointment. Night fell over the scene, and the last sign of the child was found four miles from home. By this time the mother had become frantic with grief, and her agony was heart-rending. At night fires were built and at early dawn the search was resumed with renewed vigor. The morning passed and the sun hung low in the west. but no signs of the child were discovered. A messenger was sent to town for reinforcements. Some fifty or sixty men hurried to the scene. A search was kept up all night by means of numerous lanterns, but with the same fruitless result. By the next morning some three hundred resolute men had gathered and a single line was formed nearly a mile in length and all day long the country was literally scoured wherever it was in the bounds of reason to suppose that the child had wandered. 'Hope deferred maketh the heart sick,' and many gave up all hope of finding the child alive. Many supposed it had fallen a prey to the numerous wolves, bears and cougars which abound in that country, and were about to give up the search when a piece of its dress was found hanging to a bush, far up on the side of a rugged mountain, and fully five miles from home. This gave the weary hunters new encouragement and vigor. But again the darkness interfered and the men camped in small groups all over the country. One man of the party lay in twenty feet of the child's dead body, where early next morning (Saturday) it was found dead on the mountain side. The body was found lying on its face, and a bush was caught in the back of the dress. Its little feet were swollen to twice their normal size. Thorns had pierced its body, and its breast, face and legs were literally scratched to pieces. There is no telling, or even imagining, the suffering and misery the little wanderer endured. The child had been walking but four months and had not been weaned from its mother's breast. It would appear impossible to the casual observer for a child to travel over the rough mountains and through thickets that this one did. Death, no doubt, was a sweet relief to the little wanderer's terrible suffering."

On a lone mountain side in Comanche county today stands a rude monument. It is almost hidden from view by the scrub oak and vine growth, and is free from the desecrating touch of vandalism. Long years ago while the tragedy of the lost babe and the heart-crushing anguish of the mother were the sad theme in every frontier cabin home, sympathizing hands fashioned the mute memorial on the exact spot where the body of the little babe was found. It is a crude memorial, erected by hands more accustomed to weapons of war than the chisel or trowel, but it marks the place on that lone hillside where terminated a little child's trail of blood—where perished a mother's joy and a father's hope.