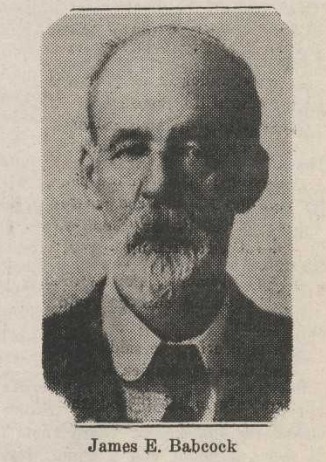 My father, Charles Babcock, moved to Bagdad Prairie the day after Christmas in 1851. He was originally from the northern part of Illinois. I was then a boy nine years old and I little thought that after seventy-nine years I would be called upon to write a history of the early settlement of Bagdad Prairie. I may be slightly in error as to the time of the events given, but the outline is correct.

At the coming of my father, there were then living on all that prairie only four settlers: a man named Rice, whom my father bought out; a German named Smeltzer, and his two sons-in-laws, Harris and Dawson, all-located in the west end of the postoak grove where about in 1854, my father surveyed out the town of Bagdad.

The earliest settlement ever made on Bagdad Prairie was a log cabin built by on of the Hornsbys, famous in Texas history, on the southwest corner of the prairie near the present home of the Hon. James H. Faubion. This must have been as early as 1845, as the building was old and deserted when I first saw it. Three miles southeast of Bagdad Prairie a block house fort had been built by the government at a big spring. I have been told that this was the first settlement in Williamson county.

Mr. Smeltzer and his sons-in-law must have settled on the prairie as early as 1845, though I never knew the exact date. To illustrate the primitive conditions of that time I will mention the fact that very few log cabins had any floors. Mr. Smeltzer's cabin had puncheon floors, that is, split hewn logs. There was not a nail nor a piece of sawed lumber in his house. He and his sons-in-law moved there in one wagon, and when that was broken down, they built what they called a Bulger wagon. The wheels were sawed from a huge live oak tree. There was not a piece of iron in that wagon and it look six yoke of steers to haul fifty fence rails from the cedar brakes west of the prairie.

The military road from Austin to Fort Croghan (now Burnet) passed through the grove where Bagdad was afterwards located and being halfway, or a day's march between the two places, it became a favorite camping ground for the United States Army stationed at Croghan. My father kept a "wayside inn" and many of the officers of the army stopped there. Robert E. Lee, Lieut. Givens and other officers were guests in our home.

A few miles east of Bagdad Prairie, on Brushy Creek, was the scene of the Webster Massacre (1838), and here the Bowmer and Davis settlements were made, but I do not know whether or not they were earlier than the settlements on the prairie.

In 1853 Thomas Huddleston, his son the Hon. James H. Faubion. This in-law, James Williamson, George Craven, and Robert Marley came to the Prairie. These men were all from Tennessee except Craven, who was from Indiana. Huddleston bought a large survey in the northeast corner of the Prairie. He had a considerable family and a number of slaves. Williamson bought out Mr. Smeltzer. Craven also had a large family, and he lived in and around Bagdad until his death soon after the Civil War. Marley, after a few months, moved to the Bend section of Lampasas county, where afterwards his son, R. N. Marley, became a large land owner and prominent stockman.

Next came Nicholas and James Branch. James Branch had a family, Nicholas had no family, but several slaves. They bought a large survey joining Huddleston on the south.

About 1854 John Faubion came to the Prairie from Tennessee. He had a large family and several slaves. He bought 1100 acres of land on the north side of the Prairie. He was a man of tireless industry and boundless ambition. He put in a very large farm. He was a first class blacksmith and a ready worker in any line. A few years later Mr. Faubion built a two story stone house with cut stone trimming s which, at the time, was said to be the best private residence in Williamson county.

The next settlers of importance were Robert Hanna and Col. C. C. Mason, who came from South Carolina. Both had families and slaves. Col. Mason bought the entire south side of the Prairie and put in a large farm. Both men were of high character, honored and respected by all who knew them. After one or two years Hanna moved a few miles east of Running Brushy.

The first schoolhouse built on the Prairie was about 1858, on the north bank of Brushy Creek, on land afterward owned by John Faubion. It was a low log house without windows and had a dirt floor. The benches were split logs without backs. The first school taught there was a short summer session by an Irishman who said his name was Willis, but that probably was not his name. We heard two or three years later that he had joined a squad of horse thieves out west. They were arrested, tried and convicted, sentenced and hanged, all in one day, by Judge Lynch. One other school was taught in the house, but I have forgotten the name of the teacher.

The first school that I attended was taught in a vacant house on the farm of Judge Greenleaf Fisk who, I understand, was the first County Judge of Williamson county. This house was on the San Gabriel, about four miles north of old Bagdad. I remember one evening coming home from school we children got lost. The sage grass at that time grew in the valleys as high as a man's shoulders. We had with us a little fice dog, and when the wolves began howling, this little dog kept up an incessant barking. This enabled our parents to find us, which was about midnight. The next day my father, Abe Smeltzer and Fielding Dawson hitched four yoke of steers to a large log, which they dragged straight away across the brakes of the Gabriel in sight of the school house. This became a beaten trail for all kinds of animals and cattle. Forty years afterward I saw a section of this trail still plainly visible. About this time my father laid out the town of Bagdad and the schoolhouse was moved over there. I believe the first school taught in it was by James Whipple.

In 1855 my father raised the first crop of wheat grown on the Prairie. It was threshed by John and Tom Snyder on a little treadmill thresher. The yield was so large that wheat-growing soon became the principal crop on the Prairie. A few years later John Faubion threshed 1100 bushels of wheat one year.

John E. Heinatz built the first blacksmith shop in Bagdad. He was a splendid workman and became one o f the leading citizens of the community. He was first postmaster, and later merchant.

The first store house was built by one Schaffer who moved a stock of good from Georgetown and placed James B. Knight in charge. It was a small box house and the stock consisted of a few pieces of calico and domestic, coffee and sugar, tobacco and snuff, and shoes. This was about 1860.

At the beginning of the Civil War, Bagdad Prairie sent a large number of soldiers. There were in and around Bagdad Prairie several men, some of them slave owners, who did not believe that secession was wise or right, but their sons volunteered in the Confederate service the same as the others. Several of these men joined the company organized at Georgetown in March, 1862, which was commanded by Judge Von Trees, and served through the war as mounted men.

After the war, Bagdad Prairie developed rapidly and became one of the best farming districts in Williamson county. By 1868 quite a village had grown up at Bagdad. A large two story stone building was erected, the lower story for school and the upper story for Masonic Lodge. Dan Emmett was the first Worshipful Master and Prof. William H. Russell taught the first school in the building,

About this time the first cotton gin was built across Brushy Creek from the present site of Leander. This gin burned down before it did any work, and another was built on the south of the creek by one A. E. Walker. It was afterwards operated by Wesley Craven. At this time cotton-growing supplanted the raising of wheat on the Prairie.

Up to 1860, dancing parties and play parties, spelling matches, horseback excursions for pecan hunting and berry picking were among the amusements of the young people. Spanish ponies were the means of conveyance. The girls rode on side-saddles and their dresses reached from their throats to the ground. Sometimes we went in squads to camp meeting. At that time the old-time camp meeting was an annual event. We attended these meetings at the springs a few miles above Round Rock, and there were sometimes as many as two or three hundred conversions. At these meetings many old time Methodist circuit riders, including Reverend J. W. Whipple, came and preached. The people camped in tents and services were held under a great brush arbor. It was the custom each day to send men into the woods west of Round Rock and the fattest beef found, no matter whose brand or mark was on it, was brought in and hung up for the use of the meeting.

On the 22nd of next April, (1930) I shall have reached eighty-eight years. Memories of these early years of my life are recalled as a pleasant dream.