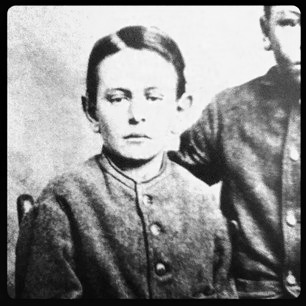 With probably one or two exceptions no county in all the great Trans-Colorado region suffered more at the hands of savage Indians during the early periods of its history than Llano. From the date of its earliest settlement, the 50's, up to the 70's, her citizens maintained existence only by unceasing vigilance, and it may he truthfully said that the trail of blood was traceable wherever the pioneer dared to erect his unpretentious cabin. An account of all the atrocities committed by the Comanches in Llano county would fill a large volume and that such a work has not been written and given to the world is a matter of regret on the part of those who would preserve a record of the heroic men and women who subdued the wilderness west of the Colorado, and with Spartan fortitude, transformed a howling waste into a land of peace and smiling plenty.

February 6th and 7th, 1868, were the darkest and saddest days that ever dawned upon Legion Valley, a pretty vale some sixteen miles from the town of Llano. At that date only a few families lived in the little valley among whom were Frank Johnson, John S. Friend, Jack Bradford, Mrs. Caudle and one or two others, whose names have escaped my memory. On the 4th a heavy rain fell, which was followed by extreme cold, and on the morning of the 6th a heavy snow covered tine earth.

The Indians had not been in the country for several weeks and no one dreamed of their swooping down upon the little settlement at a time when the whole country was locked in the frigid grasp of the ice demon. This state of affairs and the line of reasoning suggested threw the settlers entirety off their guard, and this relaxation of their usual watchfulness resulted in one of the most inhuman butcheries that ever marked the trail of blood along the Texas borders.

On the 6th of February, Mrs. Boyd Johnson and child, Mrs. Frank (Babe) Johnson and child and Miss Townsend spent the day at the home of Mr. Friend. The men, Messrs. Frank, and Boyd Johnson and Mr. Friend, not apprehending any danger from Indians, had gone away from home leaving the women and children virtually without protection. These brave men must not be censured for this seeming neglect, since it is well known among all frontiersmen that the Comanches seldom attack a house where there was least show of resistance and when an attack was made it was when the Indians knew that the inmates were powerless to defend themselves, and had the ladies, gathered on that fatal day at the Friend home preserved their presence of mind, closed the doors and remained cool, quiet self-possessed, the tragedy of Legion Valley would never have occurred.

About 3 o'clock in the afternoon and while the children were "snow balling" in the yard, one of the little girls saw a body of horsemen approaching, which proved to be a body of Indians, who were then about one hundred yards from the house and were moving as if to pass around the premises. The children raised the shout of alarm and fled screaming into the house. The Mesdames Johnson at the same time rushed into the yard to assist some of the smaller children in their flight, and when they were safely within doors, all the women, save Mrs. Friend, were if anything worse panic-stricken than the children and were almost crazed with fright.

During this time the Indians had drawn nearer the house, sufficiently close to ascertain that there were no men on the place, and the screams of the frightened women told too plainly that no opposition could be offered from that quarter. Mrs. Friend had closed and latched the doors and hastened to secure a window which was in the rear end of the cabin. The Indians dismounted and while some were forcing the door, others were trying to effect an entrance through the rear window. The door gave way and as the Indians rushed in, Mrs. Friend raised her gun and attempted to shoot the Indian nearest her, but an arrow pierced her arm and the gun was wrenched from her hands, By this time the Indians had broke the shutter from its fastenings, and were crawling in at the window. Seizing a flat iron, the nearest weapon at hand, the brave woman dealt an Indian a blow that sent him reeling to the floor. The Indian who had wrenched the gun from her hands, seeing his comrade fall at the hands of this brave woman, raised the gun to shoot her, but, with a quick eye, observing the movement, she knocked him down with a chair before he could fire. An Indian near the doorway shot her in the breast with an arrow and she fell to the floor. A savage, with gleaming knife, rushed forward and, bending over her, seized the knife, the keen blade almost severed her fingers as the Indian wrenched it from her frenzied grasp. At this juncture Mrs. Friend became unconscious, was scalped and left for dead.

There were twenty-two Indians in the bunch and they took from the house whatever suited their fancy and convenience. Just as the savages were leaving the house Mrs. Friend regained consciousness, and witnessed their departure with Mrs. Boyd Johnson, Mrs. Frank Johnson. Miss Townsend, the little Caudle girl, and Mrs. Friend—seven in all—as captives. From where she lay on the floor she could see the through the open doorway; she also saw them force their captives to mount behind their captors. Each of the Johnson women had a young babe. These were carried away by the indians, behind which the mothers were forced to ride. When all were mounted and apparently ready to set off, one of the Indians returned to the house evidently for the purpose of ascertaining if Mrs. Friend was really dead. Divining the object of his errand. the brave woman assumed the exact. position she had occupied when they left the house. The Indian came in, seized the arrow that had been shot into her breast, and wrenched it from side to side to see if she was alive. With nerve and fortitude far beyond human comprehension this heroic pioneer lady bore the unutterable torture without moving a muscle or showing the least sign of life or sensibility. Satisfied that she was dead the inhuman savage left her, rejoining his comrades, all of whom left, going in a northwest course.

As the men were not expected home until that evening, Mrs, Friend decided to leave her house and seek relief at the home of her nearest neighbor, Jack Bradford, who lived a mile and a half away. She dragged her bleeding form from her now desolate home, and with superhuman effort, made her way to Bradford's. With snow she bathed her face, which was covered with blood from the terrible wound inflicted by the tearing away of her scalp, and the snow also served to staunch the flow of blood from her lacerated hand. It was dark when she fell exhausted at Bradford's door. With feeble utterance she told of the Indian attack on her home and of her awful experience. and begged Bradford to extract. the arrow from her bosom. The poor man, frightened beyond expression, tried to remove the cruel shaft, but failed in the effort. With cloths he bandaged her hand and scalp wound. heaped wood in the fireplace, placed the wounded lady on a pallet before the fire, set a bucket of water within her reach, gathered his own family and sought concealment in the nearest cedar brake.

Twenty-four hours after the attack on the Friend house, word of the tragic affair reached Llano, only sixteen miles distant. Every man who could possibly go hastened to the scene of the awful occurrence. A physician also went to the relief of Mrs. Friend. It was late at night when the men arrived and they had to wait until morning to see the trail which was thirty-six hours after the Indians had left. The next evening about five miles from the Friend home, Mrs. Boyd Johnson's child was found with its brains beaten out. The morning following, Mrs. Babe Johnson baby was found with its throat cut from ear to ear. A few hours later, the men came upon the bodies of both of the Mrs. Johnson's, murdered, stripped and scalped.

In the afternoon of that same day, Miss Townsend's body was found. Her throat had been cut; she had been scalped and her body horribly mutilated.

The bodies of these victims of savage ferocity were tenderly borne away and given burial. The Indians made their escape as usual after committing such appalling atrocities. The little Caudle girl was held in captivity three or four years after which she was released by government agency and restored to her mother. Later she married a Mr. Benson and was a few years ago, a widow, living in Llano. I knew Mrs. Benson quite well, and am largely indebted to her for many of the facts herewith placed upon record. Relating her experience the first two days of her capture she says: "It was late in the evening when the Indians started with us from Mrs. Friend's. It was cloudy and cold. There were two or three squaws with the Indians and one of these took me up behind her and was very kind to me. She drew a blanket around me and I didn't suffer much from the cold. The first night we camped on the northwest side of a small mountain not a great. way from the Friend place. We found shelter from the cold wind in a cedar brake where they kept up a good fire all night. My squaw slept with me and from that time on as long as I stayed with the Indians she was my adopted mother, and always treated] me as her own child. The others did not fare so well. Just before we went into camp that first evening Mrs. Boyd Johnson's baby began to cry for its mother, who was riding behind the Indian who was carrying the child in his arms. He choked the child to make it hush. Mrs. Johnson then tried to lake her child away from the Indian and this seemed to exasperate him to the extent that he took the little one by the ankle and dashed its brains out against a tree. I can't begin to tell you of the shame and horrors Miss Townsend and Mrs. Johnson suffered at the hands of those savage brutes all that awful night. Yes, I was eleven years old and I remember how they suffered. They cried and prayed all the time and they knew they were going to be murdered. Shortly after we left camp the next morning they took Mrs. Babe Johnson's baby and cut its throat and then held it up by the feet with its head down right before her, as if to see the blood flow. Mrs. Johnson screamed and fainted, at which they all laughed as if it were great sport. About noon they all halted and seemed undecided about something. At last they seized the two women. I saw them draw their knives, but just then my squaw threw a blanket over my head. That same day they killed Miss Townsend. and hacked her body horribly."

Mrs. Friend recovered from her wounds and afterwards moved to Missouri. Her captive boy was finally restored to her. I last heard of her at Springfield, Missouri.

HERE IS ANOTHER GREAT TEXAS HISTORY GROUP YOU CAN JOIN 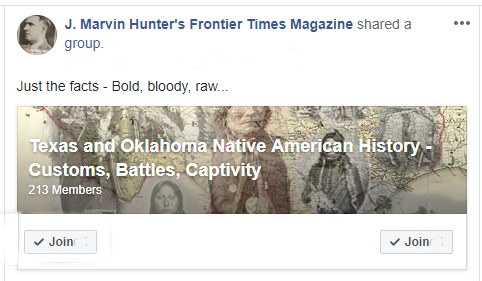