Home  ›  Blog  ›  THE SLAUGHTER OF THE RUSSELL FAMILY

THE SLAUGHTER OF THE RUSSELL FAMILY 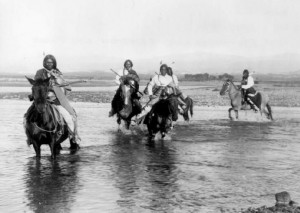 This series of Frontier Stories was written several years ago by John Warren Hunter, now deceased. One article of the series will appear each month in Frontier Times.

One of the most atrocious murders ever committed on the frontier was the slaughter of the Russell family at their home on Martin's Prairie, Wise county, in August, 1868. Mrs. Polly Russell was a widow with four children. The Youngest was a boy of ten years, the next a boy 17, third Martha Russell, a beautiful girl in her teens. and lastly, Beau Russell, a young man. On the day of this shocking tragedy, Mrs Russell was helplessly surrounded by her three youngest children. On Sandy Creek, some miles distant, the government was operating a saw mill where lumber was being furnished for the building of the post at Fort Richardson, and at this sawmill Beau Russell was working. Although the ever present danger of Indian attack was realized and guarded against in all possible ways, yet this family must earn its living from the soil and must perforce remain upon the exposed farm to achieve that worthy purpose, meanwhile trusting a kindly Providence for safety and protection.

Situated a short distance from Mrs. Russell's house was a large cane patch, and in this patch, at some hour in the forenoon, probably before daylight in the morning, a large party of Indians had found concealment. Later investigation of the many signs left in the patch revealed such quantities of chewed cane as to lead to the conclusion that the savages had spied on the premises for many hours before they made the attack. Imagine these cowardly, blood-thirsty demons leering forth from their coverts, ready to spring upon the defenseless mother and helpless children at the first instant of assurance that no man was on the place to frustrate their fiendish design. Evidently as they moved about through the tall cane they were discovered, but as not one of the family survived to tell the story we have to rely upon the signs left to draw a conclusion as to the brave defense made by the young hero, 17-year-old Harvey Russell. The number of exploded shells lying around the yard and in front of the cabin door—mute witness of the loftiest courage—gave evidence of a desperate struggle in defense of mother and home. In those days cartridges were of priceless value to the frontiersman and each man knew exactly the number he had in store. Beau knew to a certainty the number his brother had that fatal morning when he kissed his mother goodbye and hastened up the valley to engage in his daily toil at the sawmill. A count of these cartridge shells found in the yard tallied exactly with the number of cartridges the boy was known to have possessed and proved that his Winchester continued to flame until the last cartridge had been fired. But the boy's brave stand was of no further avail, for anon the painted savages were swarming about the house and yard with hideous yells and barbaric impetuosity.

The hellish work was now begun. Just who fell first or which was the last to fall at the house will never be known. The home was looted and every article of furniture was wrecked. The window panes and frames were smashed, the feather beds ripped open and their contents thrown to the winds, and all articles of clothing carried off.

No pen, no language, can depict the horror of the scene that met the gaze of the faithful toiling son and brother, Beau Russell when he returned from his day's labor that evening at sundown. Jimmie Russell, his little brother, lay dead and mangled in the yard. Across the threshold of the cabin door lay the mother in pools of her own blood. Blood everywhere, and small footprints of crimson, made by the little boy, covered the floor. In vain he called for Harvey and the sister but no response came, and with grief unspeakable he closed the door on the desolate, wrecked and ruined home and hastened towards the sawmill. At dawn the following morning he returned with a party of men to bury the dead. Further search revealed the body of Harvey Russell under the wreckage in the cabin home, but the sister was nowhere to be found. During the following day the young man was crazed with the one burning, consuming desire--to find his sister, all the while being oppressed with a certain sense of apprehension that she had been murdered and left in the wilderness to be devoured by wolves. With a party of men from Decatur who had rallied to his aid he took the trail and followed the Indians. Reaching a point about three miles from home they came upon all that was mortal of poor Martha Russell; a ghastly remnant of the beautiful girl just budding into a joyous womanhood. Wild beasts had torn the flesh from the disjointed frame and near at hand lay the bonnet which the girl had worn at the time of her capture. Evidently the Indians had accomplished their most fiendish purpose, following which they had murdered the girl, thus closing one of the saddest dramas of life.

Having accomplished their bloody work at the Russell home, the Indians departed going in an easterly direction toward the home of Dick Couch, a settler who lived a few miles away. Dick Couch. Jr., a small lad, had been sent on an errand to a neighbor's and was returning home when the Indians discovered him and gave pursuit. The little boy was hard pressed but outran his pursuers. As he neared the house one of the Indians, supposedly the chief, crowded him so closely that the lad barely avoided the savage's grasp by running under a wagon that stood near the gate, and so bent was the Indian on capturing him that his horse ran up against the wagon with great force which caused the Indian to give expression to a series of grunts and howls. Dick Couch, the boy's father, was known as the best shot on the border. With his trusty rifle he stood in his yard and witnessed his son's race for life. He only waited for the chief to reach down and seize the boy and then his winchester would have spoken and there would have been wailing in some distant tepee. The Indian was so intent on the boy's capture that he seemed not to have discovered the frontiersman until he had taken up so suddenly against the wagon, after which he lost no time in getting beyond the reach of that gun. Mr. Couch could have killed him easily, but prudence bade him withhold his fire. He was in the presence of a large body of yelling savages and he had only a few cartridges, and these he held in reserve to be used in case the Indians made a direct assault upon his home.

After a few efforts to frighten and intimidate the Couch household, which proved futile, the Indians left, still pursuing their course in an easterly direction. On Upper Catlett Creek they halted at J. D. White's field where they destroyed a large quantity of corn and melons. From this point they went on into Denton county from whence. after rounding up a large number of horses, they returned to their safe retreat in the Indian territory.