AN INDIAN BOY EXECUTED IN FREDRICKSBURG IN 1852 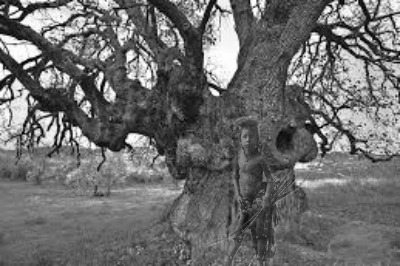 From Hunter’s Frontier Times Magazine, May, 1927

“IT WAS the white man's fault," declared Mrs. G. O. Otte, an eyewitness of the Fredericksburg tragedy in 1852, "that there ever was any trouble between the Indians and my people."

The feeble light of an oil lamp sparsely illuminated the small room of Mrs. Otte's farm house, where she sat amidst a small family group reminiscing of the days gone by. The oil lamp was burning low and the final hour of day was waning, thus providing a symbolic setting to her own life which had attained the seriptual height of fourscore years.

"A crowd gathered, among them my playmates and l." Mrs. Otte related. "After a lengthy conference, the mob moved about one half mile west of town at 'the village creek.' The boy was forced to gather wood for his own funeral pyre, built in the shade of a large pecan tree. Then the boy was fastened to the trunk of the tree. A number of men stepped forward and leveled their shotguns, and riddled the body of their youthful victim with more than thirty loads of shot. The boy's body was thereupon burned upon the wood, which he himself had gathered.'

This savage action of the white man, according to Mrs. Otte, was watched by a small number of Indian warriors, who silently and solidly stood a little distance above the mob scene.

"This bloody murder perpetrated by the white man upon an innocent Comanche boy, started all the trouble." continued Mrs. Otte. "Several weeks later the blood of the first white man, George Brode, was shed in revenge by the fierce warriors of the Comanches. Horses and cattle were stolen. The butcher was never killed."

The Indians never ransacked a single home. Their attacks were made upon individuals whom they encountered unprotected. Among those killed and scalped were many women and children. A number of children were kidnapped, one of them Herman Lehman, a brother of Adolf Lehman of Brady, who until this day lives as a faithful member of an Indian tribe in Oklahoma.

Mrs. Otte and her husband settled in McCulloch County, eight miles south of Brady, thirty-nine years ago, where they bought a tract of 160 acres of land, which by rigid economy, endurance and labor they increased into a substantial ranch.

The law of the gun was to a great extent the law at that, time in this section of west Texas. Their slow rise to a small fortune was fraught with innumerable hardships. Wild beasts and cattle thieves decimated their small herd of 460 head of cattle, which they had brought along from Fredericksburg during their first year of residence in McCulloch County.

"My husband and I have lived through many exciting experiences on this ranch," Mrs. Otte related. Her husband was wounded in an encounter with a notorious cattle thief, who suspected him of testifying against him before a grand jury.

Among the stories told was the attempted lynching of a cattleman, whom his fraternity had suspected of being a thief. The scene was enacted under one of the stately live oak trees in front of the Otte home. The rope had already been thrown over one of the stalwart branches of the tree and tied around the neck of the alleged offender. The doom of the man was narrowly averted by the sudden appearance of a prominent McCulloch County ranchman.

Mrs. Otte has always been numbered among the most respected and law abiding citizens of this community. She is the mother of eleven children, and is a firm believer in secular and religious education.