BEATING BACK THE RED WARRIORS 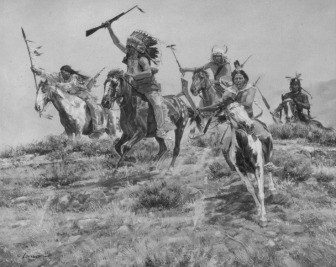 Several years ago Mr. J. M. Hall - comb of Ozona, Texas, related to me the following account of an Indian raid into Coleman County, Texas, during frontier days and the killing of Burrell Brown:

"In the year 1868 quite a number of families were forted up at a place known in those days as Flat Top, on Elm Creek, in Coleman County. Among some the those families. I remember the names of Rich Coffey, the Guest brothers, the Beddo brothers, the Wiley brothers, the Garden brothers, and a number of cowboys, among whom I recall Dick Robinson, Sugg Robinson, Pink Robinson, Jim and Bob Hysaw, including myself. At that time I made my home with the Guest brothers (N. T. and W. M.) I was not at home at the time of the raid hereinafter described, being absent on a round-up, which the sequel will show, but I heard the particulars so often described by those who participated in the chase and the fight that ensued, that it seems as fresh in my memory as if the events were but yesterday, and the truth of my statements will be attested by either or all of the survivors of that tragical event.

"It was in the month of June, 1868, when the raid occurred. The men who were at home at Flat Top had tied up their saddles for the night, after having taken their loose horses out some three or four miles to where there was good grazing. N. T. Guest had tied his horse to a small tree near the house, and some time after dark, probably nine o'clock, or a little later, he heard a disturbance, and going out, he discovered that his horse had broken loose and was running away. It later developed that the Indians, fifteen in number and all afoot, had given the horse a scare, causing him to break down the tree to which he was tied, and to dash off in the direction the Indians would have him go, dragging the tree after him in his mad flight. However, he did not go far until the Indians captured him.

"Mr. Guest and Bill Beddo immediately mounted and went in pursuit. and after crossing a ravine about half a mile from the ranch, they came to the small tree, or rather bush, to which Guest' s horse had been tied. The moon was shining dimly through a cloud. Guest dismounted, and after examining the ground, he said: `Bill, here is where they have cut my lariat; they are close by and we have got to look a little out.' He had scarcely remounted his horse when a low peculiar sound emanated from a small grove of elms about forty yards away. This sound was made by human voices and cannot be described in words, but those two men understood its import. Guest said to Beddo: `We had better be getting back. We are nearly surrounded, and they are right at us. You ride on my right side, as I am left-handed with my pistol, and we will stay close together. If your horse falls I will stay with you, and if my horse goes down you stay with me.'

"This conversation consumed only a few seconds, and as the two men turned back the Indians charged, uttering, not the warwhoop, but continuous low, weird sounds as if fully confident of an easy victory.

"At the intervening ravine herein mentioned, there was one particular crossing the two men had to reach. Headed off from this, their chances of escape were hopeless. This ravine was two hundred yards or more from the point where the race began. All the Indians were afoot, except two, who were mounted, and one of these was riding Guest's horse. These two Indians brought up the rear and attempted flank movement. The two flankers ran parallel and almost alongside of the two fleeing white men. They were nearing the ravine, the savages still chanting that strange low medley of sounds and closing in a half circle in the rear, almost on the heels of their intended victims. At this juncture, the Indian on the left, the one that was riding Guest's horse, dashed up to the side of Guest and was within ten feet of him, when Guest, holding his six-shooter in his left hand, fired point blank at the Indian, who fell from his horse, badly wounded.

"All the Indians gathered around their fallen brave while the two white men hastened on to the ranch and gave the alarm.

"The next morning Guest visited the scene where he had shot the mounted Indian and discovered his own horse nearby with a red macknaw blanket across his back, also a half-hitch rawhide rope on his nose, which prevented him from grazing. The Indian was dead. Examination of the spot showed that the warriors straightened out their dying comrade on the grass and had administered such remedies as their untutored minds could suggest. Two little rag pellets left on the ground showed how they had tried to stop the wound made by Guest's pistol ball; the little rag wads were used to stop hemorrhage. The grass around this spot was pressed and trampled down, showing that the Indians had stood and sat around their dead comrade for some time. Finally, it seems, they left hurriedly, as nearby was found a pair of moccasins belonging to the dead Indian, and also his cap.

"The sun was scarcely above the horizon when sixteen men, mostly from Flat Top ranch, were in the saddle and hot on the trail, which led up Elm Creek in a northerly direction. Guest and Beddo owned a pair of very fine dogs which had been trained for the business, and these dogs led the trail, enabling the white men to make good speed in pursuit. Six miles from the ranch there was a gulch, or canyon, which headed abruptly up against a mountain. The sides and approaches of this depression were exceedingly rough. In and near the head of the canyon, there were shelving rocks, forming cavernous shelter. Here the Indians sought refuge. When the dogs reached the brink of the gorge in which the Indians lay, they halted and, with bristles up, began to fret and growl. Bill Guest and Burrell Brown were in the lead and within forty steps of the dogs. Bill and Bart Guest, Burrell Brown and Bill Beddo at once spurred forward. Just as they leaped their horses off the ledge the Indians opened fire at close range. Finding that the other boys had not yet joined them, Bill Guest suggested that they retreat from there. Burrell Brown was riding immediately next to Bill Guest, and as they turned and leaped their horses back upon the ledge, and while the Indians were pouring shot and arrows among them, Brown fell, shot through the body. He fell on a large flat rock on the bluff overlooking the gorge where the Indians lay, and his horse ran a short distance. Bart Guest secured the horse, after which the three men fell back about forty yards, dismounted, and the fight began with desperate earnestness.

When the Indians saw these men fall back they rushed forth and surrounded Brown's body, removing his scalp, and mutilating him in the most sickening manner; then, with defiant yells, they turned their attention to the men in front. These three men, the two Guests and Beddo, armed with Spencer rifles and six-shooters, stood their ground for thirty minutes, keeping up a rapid fire on the savage band which outnumbered them five to one. When their fire would become too hot, the Indians would fall back into the gorge, carrying their dead and wounded, but after a brief respite would charge again. In these charges sometimes only six or eight Indians would constitute the charging party, and this gave the boys encouragement, as these small parties showed that the attacking forces had been badly crippled.

"An Indian armed with a six shooter, advanced and engaged in a regular pistol duel with Bill Guest. He carried a shield on which he caught at least six bullets from Guest's pistol. When Guest had emptied his pistol he cooly began reloading, whereupon the Indian raised his pistol and supporting it with both hands, took deliberate aim at Guest—but he never pulled the trigger. Bart Guest, who stood about ten feet from Bill, and was replenishing the chamber of his gun while the duo was going on— shot the Indian dead just in time probably to save Bill's life. At the crack of Bart's rifle, the Indian gave a loud grunt and fell within a few feet of Brown's body.

"Beddo then asked the boys about their ammunition, and finding their supply was running low, he said `I have only three shots left,  and you had better save what you have. We will go back an the hill where the other boys are, and if they will assist us we will return and recover Brown's body. If they refuse to aid us but will divide ammunition, we will come back and get the body at any and all risks.'

"But the men on the hill would not help to recover Brown's body, neither would they divide ammunition. Bill Guest then said, `Bart, my horse is shot; let me have Brown's horse, and while you are taking my horse home I will ride to Home Creek and get men who are not afraid to go with me and get Brown's body tonight.' This was readily agreed to, and Bill hastened away to the Home Creek settlement. where he was joined by Ans Waldrip, Bill McCollum, and one other man whose name I have forgotten. That same evening, they came back by Flat Top ranch where reinforcements awaited them. The party started immediately and was composed of Bill Guest, Bill Beddo, Rich Coffey, Ans Waldrip, Bill McCollum, Bart Guest and the other man. They went to the battleground, reaching there after nightfall, and found the body of Brown, as before stated, horribly mutilated. The Indians had disappeared, but the body of their comrade and neighbor was tenderly carried to the ranch, and on the day following interred at a little point overlooking Flat Top ranch.

"The day after the funeral, Coffey, Waldrip, McCollum, and other boys visited the battleground. They said that the bottom of the canyon where the Indians had been concealed, bore every appearance of a slaughter pen, and from all signs the band must have been almost wiped out. Pools of blood on the large flat rocks showed where the dead had lain and the number of rag pellets or wads lying around and which were used to stop hemorrhage, showed the havoc wrought by the guns of the three men who fearlessly poured the bullets into the midst of the Indians.

"This band of Indians had just come down into the settlements afoot, as was their custom, and had succeeded in capturing but two horses, one of which was that of Mr. Guest, and which was returned.  When cornered in the canyon, afoot and surrounded, the Indians desperately resisted. In this raid the red men got one white scalp and one old pony, but there were few of them left to attend the scalp dance when they got home with their trophies.

"Burrell Brown, the victim of the fifteen thieving Comanches, was a brave, generous, upright man, and his loss was keenly felt at a time when the frontier needed men of his courage. He left a widow and four little children, but I lost trace of them many years ago. I have also lost sight of Beddo, John Coffey lived at Noxville, Kimble County, for many years."