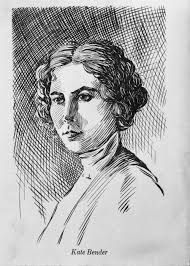 In the spring of 1871 the Bender family moved to the southeastern portion of Kansas and homesteaded. In the main they were an uncouth, unsociable German family of four, the elderly parents, their queer son, John, and a 20-year-old daughter, Kate. She was the exception, brilliant, sociable, and attractive in fact; seemingly such a contrast from the others one might suspicion that the stork on some tempestuous night in the confusion of hurried calls had delivered the wrong bundle. But she was a decoy and a snare—the plotter—the master mind. Her bosom nursed as foul a heart as ever fiction painted, a ghoul haunting the darkest recesses of Hell's Half Acre.

This family was destined to make history for the Sunflower State so bloodcurdling and ghastly that men to this day shudder when they hear the story of the "house of Horrors" which might have added to the name of "Bleeding Kansas." Kate was the backbone, the brains, and the central figure in this dismal and benighted role. Where they came from nobody knew, and typical of sparsely settled communities, it was "nobody's business." About 14 miles east of Independence they erected their cabin "by the side of the road." But not to "view the races of men go by." They did not go by, at least not all of them. The westbound travelers with wagons and teams or saddle horses, sometimes loaded with bags of gold and silver bullion, passing through the community, suddenly disappeared as if taken to heaven in a whirlwind. Local inhabitants were never harmed, as the family desired to be in "good standing" in the community wherein they resided. A strange paradox— the closer one was to danger the more secure he was. Their only victims were those traveling alone from afar headed for the frontier and beyond communication and who they thought would never be traced to their door.

The Bender's domicile was evidently carefully planned before their arrival to that treeless, windswept prairie. They easily picked a location beyond the view of their nearest neighbor, who was miles away. Their long, rough board shanty was divided into two rooms by stretching a wagon sheet across the center. The back room was the kitchen, and a table was placed next to the canvas partition with a bench between, so close that one's form in sitting down could be plainly seen to an observer in the next room. Their invisible means of support was camouflaged by a crude sign nailed over the door advertising "Groceries." They also solicited night lodgers, which had an appealing tone to the tired, dusty wayfarer along that lonesome road.

There was another gruesome detail of that "haunted hut"—the pit. A trap door was put in the floor, over which was placed their huge, legless cook stove. This dropped abruptly into a cellar large enough to dump a corpse temporarily. A well was dug and a barn erected. An orchard, an untimely thing to the average nester, was set out, which they kept freshly harrowed and cultivated to a fault. Everything was then in readiness for the fearful tragedies to come.

Two years elapsed before the Benders were suspicioned as being a lurking evil in the community. Neighbors, however, in those days did not assail each other on mere suspicion, but after repeated inquiries had been made concerning parties that were supposed to have passed that way, the leary populace shunned the place as they would "pestilence and death." That entire end of the State became alarmed. It seemed as if some power, invisible, yet dimly sensed, had settled over the community to direct this gruesome work, unseen, unheard and unmolested. It was a "port of missing men." But "murder will out." The blood of murdered men seemingly cries from the ground. However when danger was scented on every hand the neighbors were loath to believe that these neighbors, with whom they had visited and traded, could be such fiends.

But the fatal day came to the Benders, and strangely, without a tint of local color. One Dr. York of Independence was the last victim of their lust for blood. He had been visiting in Fort Scott and was returning home. On entering the realm of the Benders he too, disappeared from the face of the earth. He had a brother, Colonel York, prominent in the high legal and political circles of the State, and was of the type that would not allow a calamity of this magnitude to go unsolved or unavenged. He was satisfied that the Doctor had not passed the Bender "dead line," so he gathered a posse and started for the Bender home. He questioned and cross-questioned Kate and John, and not being prepared for this unexpected visit their stories varied, and Kate was terribly upset. She talked glibly, acknowledged that he had been there, told of his resting awhile, purchasing some sardines and riding away. Colonel York knew human nature as he did legal terms; he had the experience, and every word, look or gesture, and the general uneasiness and resentful looks of the parents, sealed his conviction that on that spot his brother was cast into eternity Kate changed the subject to occult powers in which she claimed to be marvelously gifted. She was not "in tune" at that moment, but if he would return later all alone she would proffer this service to help locate his brother, and manifested much concern over his disappearance. Even if Kate had possessed genuine faith in the success of her "seance," this proposition sealed her already impending doom. It struck Colonel York as a wail issuing from the dark ages or trying to sidestep him by chicanery. The posse rode away. Naturally now the extermination of the Benders was as light a task as cleaning out a den of luckless coyotes.

At this stage there was a lull in the activities surrounding the Bender tragedy, and after two weeks the report came that the Benders had fled from the country and that the possemen had shifted from the scene.

A crowd gathered at the deserted home. Many opinions and solutions were offered, but finding the doors locked they did not touch a thing. A report was received that an unattended wagon and team was found on the outskirts of Thayer, the nearest passenger station. It was immediately identified as belonging to the Bender outfit. It was now known that the Benders were either killed or were in flight. People from all parts of Eastern Kansas came to help clear up the mystery. The house was broken into and the first thing discovered was the foul, stench-laden pit. Near an apple tree in the garden, which had not been cultivated during their absence, the loose dirt of the last grave had settled below the hard dirt of the bank and betrayed what was once a 3x6 excavation. This was dug into, and Dr. York's body was unearthed. Eight more bodies were uncovered in the orchard, and the body of a little girl was found in the well; she had apparently been thrown in alive. The others had had their heads caved in and their throats cut. This latter was apparently the handiwork of Kate. They had been robbed and partially disrobed, and thrown in face downward.

The Benders seated their victims with back to the curtain. Kate would entertain and wait upon them, and when the imprint of their head bulged through the curtain they were slugged with a heavy iron hammer found in the front room, then the body was dumped into the pit until a favorable time for burial. Then in the darkest hours of the night the victim was removed from the pit and buried in the garden. Harrowing followed, which brought the soil to a uniform level and freshness.

The Benders, though diligently hunted, did not leave a trace behind. Whether they fled through fear of a mob, and had two weeks the start, or —well, let us read between the lines:

Colonel York was seeking the murderers of his brother; he was not the type to leave a beast unslaughtered that had spilled his nearest kinsman's blood, and the lethargy of the neighborhood spurred hint on an individual course, common in the pioneer west. It is not logical to believe that the posse rode away that evening without further action and evince the calm unconcern that they did following the Benders' disappearance. It is known that Colonel York, after his visit to that "neck of the woods," manifested a silent satisfaction over their supposed flight. He was prominent in matters of state and had no desire for publicity in connection with a justifiable gang slaying. Supposedly they returned at some timely hour between dusk and dawn to the Bender house, and dealt gently but firmly with the family, who were convinced by their grim, determined looks, that they meant business; ordered John to book up the team, which would suggest flight; had Kate to lock the doors to postpone the discovery that they were really gone forever; and when once out in the darkness, in some lonely spot, where the foot of man would not tread for years, inflicted the same fate, justifiably, that the "killers" had so often inflicted atrociously upon others. Then the wagon and team was driven to Thayer and abandoned. Four people, two appearing to be women, boarded the train for a certain town, but got off at another. This was so cleverly carried out that York was never generally or publicly accused.

The morbidly curious in quest of the gruesome still probe about the old Bender home site. They might think that in the Benders' hurried departure they had left buried some of their ill-gotten gold. This isolated prairie home was a true likeness of the Devil's own workshop; a gloomy picture, sitting as the "death trap," the pit representing the bloody morgue, and the orchard as the ghost-haunted reposing ground for skeletons and the decaying bodies of human beings. A ghastly setting, befitting the obnoxious tastes of the brutal Benders. Thus, as a warning to all evil doers, passes this ill-fated family that paid the penalty which Providence inevitably invokes when principle and human rights are disrespected.