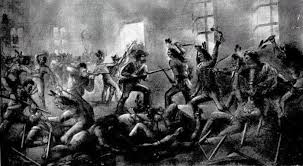 Here is an echo of the Council House Fight, which took place in San Antonio, Texas, in March, 1840, just one hundred and eleven years ago. The subject of this sketch is Mrs. Elizabeth Mitchell, who, in 1912, gave the story of her captivity to John Warren Hunter, in San Angelo, Texas. At the time of the interview Mrs. Mitchell was in her 81st year, and as active and alert as a woman of fifty. Here is her story:

Mrs. G. D. Mitchell was a visitor in San Angelo. Her home is in Gonzales, and in company with her daughter, Mrs. L. D. Shepperd of Midland, Texas, she had been visiting a granddaughter, Mrs. Sam Mims of Grape Creek, Tom Green county.

Mrs. Mitchell was born in Alabama May 25, 1832. Her father was Mitchell Putnam, who served in the Creek War and in the War of 1812, under General Andrew Jackson, and later was a soldier in the Mexican War. In 1835 Mr. Putnam came with Austin's Colony to Texas and settled on the Guadalupe river, near the old town of Clinton, DeWitt county. In the fall of 1838 all of the Putnam children—four in number—were captured by the Comanches, and also one of the Lockhart children. They had gone out to gather pecans in the Guadalupe bottom and when some distance from the house, a band of mounted Indians swooped down upon them, seized them and carried them away into a hopeless captivity. The names of the children as given by Mrs. Mitchell and as recorded in history, were: Rhoda Putnam, aged 14; James Putnam, aged 7; Elizabeth Putnam, aged 5; Lucy Putnam, aged 2, and Matilda Lockhart, aged 14. Elizabeth (Mrs. Mitchell) was the only survivor of the group at the time of this writing. She said her captors gave her and the other three smaller children into the custody of as many "squaw mammas," who treated them with a degree of kindness, but the horrible treatment accorded her sister Rhoda and Matilda Lockhart was brutal beyond expression.

It will be remembered by students of Texas history that on February 15, 1839, Captain John H. Moore, with his company of sixty-three Texans and twelve Lipan Indians attacked the Comanche village on the Colorado. A desperate battle ensued in which the Texans were somewhat worsted. This occurred, according to reliable data, near where Robert Lee, Coke county, now stands. Mrs. Mitchell remembered this battle quite well and related the haste the Indians made in rushing their captives, their squaws and children to a place of safety. Matilda Lockhart was among these captives and heard her father's voice above the din of battle, calling her name, and when she screamed in response to his call a savage seized her by the hair and jerked her around with such force as to tear out a large portion of her locks.

Mrs. Mitchell was one of the captives restored shortly after the Council House Fight in San Antonio in March, 1840. When with other captive children she was brought in Judge Hemphill recognized her as one of the Putnam children and taking her on his horse, rode to Gonzales, where he restored her to her overjoyed parents. Her brother had been restored about a month prior to this, and her sister Rhoda was never more heard from. Of her miraculous restoration to her people it becomes necessary here to give a brief account of events that led to Mrs. Mitchell's delivery by her captors into the hands of her countrymen. We quote from Brown's.History of Texas:

"In San Antonio on the 19th of March, 1840, occurred a deadly fight between a party of sixty-five Comanches (chiefs, warriors, women and boys) and the Texas troops, commissioners and a few companions. The Indians under prior agreement, came in to make a treaty, and were to bring in all the Texan prisoners they had but only brought in one. The Chiefs entered a Council House to confer with the Texan commissioners, Cols. Hugh McLeod and Wm. G. Cooke. Two companies of Regulars, under Col. Fisher, were at hand. Part of one of the companies under Captain George T. Howard was in the hall. Learning from the captive brought in by the Indians (Matilda Lockhart. an intelligent girl of fourteen, that the Indians had captured in October, 1838,) that the Indians had numerous prisoners, and that their policy was to bring in one at a time and secure more rewards, the commissioners informed the twelve chiefs that they were prisoners and would be held as hostages for the safety of captives then in their hands and that they might send their young men to the tribe, and as soon as the captives were restored they should be liberated.

"Captain Howard posted sentinels at the doors and drew up his men across the room. An Indian sprang to the back door and attempted to pass the sentinel, who presented his musket, when the chief drew his knife and stabbed him. A rush was then made to the door. Captain Howard collared one of them and received a severe stab in the side. He ordered the sentinel to fire upon him which he did immediately and the Indian fell dead. They then all drew their knives and bows and evidently resolved to fight to the last. Colonel Fisher ordered: "Fire if then do not desist." The Indians rushed and a general order to fire became necessary.

"After a short but desperate struggle every one of the twelve chiefs and captains in the Council House lay dead, but not until, in the hand to hand struggle, they had wounded a number of persons.

"Captain Redd, whose company was formed in the rear of the Council House, was attacked in the yard by the warriors who fought like wild beasts. The Indians took refuge in some stone houses from which they kept up a gaffing fire with bows and arrows and a few rifles. Their arrows, whenever they struck one of our men, were driven to the feather.

"A small party escaped across the river, but were pursued by Captain Lysander Wells with a few mounted men and all were killed. The only one who escaped was a renegade Mexican among them who slipped away unobserved.

"In such an action—so unexpected so sudden and terrific, it was impossible at times to distinguish between the sexes and three squaws were killed. The short struggle was fruitful in blood. Our losses: 7 killed and 8 wounded. The Indian loss was 30 chiefs and warriors, 3 women and 2 children; total 35. Prisoners taken: 27 women and children and two old men; total 29. Escaped, the renegade Mexican, 1. Over a hundred horses and a large quantity of buffalo robes and peltries remained to the victors.

"By request of the prisoners, one squaw was released, mounted, provisioned and allowed to go to her people and say that the prisoners would be released whenever the Texas prisoners held by the Indians, were brought in.

"A short time afterward, a party of Comanches displayed a white flag on a hill some distance from town, evidently afraid to come nearer. When a flag was sent out, it was found that they had brought in several children to exchange for their people. Their mission was successful and they hurried away. "

Elizabeth Putnam, now Mrs. Mitchell, was one of the number of these children brought in, all of whom, however, were not white. She said there were ten in all, seven Mexicans, one small negro and two white children. She said the Indians knew that she and Rhoda were sisters and that when the company started with her and the others to San Antonio her "squaw mamma" directed her to go and tell Rhoda goodbye.' "I went to her," the aged lady said in a tone of deep sadness, "and told her goodbye. That was the last time I ever saw my beloved sister; we never heard of her again."

Matilda Lockhart did not live very long after being restored to her people. The cruelties practiced upon her by her savage captors were beyond conception. Her frail body was literally flecked with scars from head to foot, and while in the Council House at San Antonio she was barely able to walk. While in camp before she was brought in, and to prevent her running away, the Indians burned the soles of her feet until the skin came away in strips and flakes. Pale, emaciated and weakened from hunger, hardships and abuse, the once beautiful child was given every attention that parental and neighborly solicitude could bestow, but she pined away and died. At her grave her father, Captain Lockhart, in agony of soul said: "Life is so short: would that I could live a thousand years so I could fully avenge the blood of my child."

The strangest part of Mrs. Mitchell's story was in relation to the little two-year-old sister, Lucy. This child was sold, supposedly, somewhere in Kansas, to a Missourian by the name of Chenault, who gave her the name of Marv, adopted and educated her. Mr. Chenault had a brother who lived at Gonzales and had been for many years district and county clerk of that county. In 1866 —twenty-eight years after the capture of his ward, who was yet unmarried—Mr. Chenault moved from Missouri and settled in Gonzales county, within twelve miles of the scene of Lucy's capture. When it became known that she was an ex-captive, many who had lost children at the hands of the Indians visited her, hoping to identify in her, a long lost child. Among these were Mr. Putnam and his daughter, Mrs. Mitchell, who identified the daughter and sister by a birthmark and a certain scar. The identification was most complete and the joy over the long deferred restoration was beyond description. Lucy returned to her father's house (her mother having died of a broken heart in 1846), took up her abode under the parental roof, and adopted the name "Lucy", because, as she said, "That is the name my mother gave me." Lucy afterwards married a man by the name of Jack Harris, and moved to Robert Lee, Texas, where she died about 1891, leaving a son, Boyd Harris, who some forty years ago lived at Fort Davis.