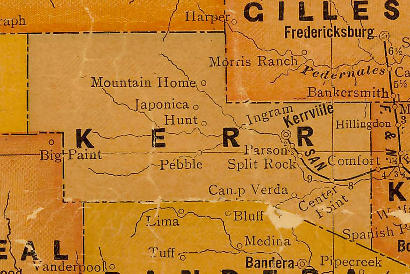 Indians in 1871 killed the husband and two children of Mrs. E. K. Kirby, 76-year-old-resident, living with her daughter 20 miles north of Uvalde. Although Mrs. Kirby remembers vividly the details of the Indian raid, it is only upon rare occasions that she can be induced to talk about the killing of her three loved ones, the wounding of her 18-month-old-babe, Joel; the kidnapping of her little girl, and the fearful pain in her shoulder as she jumped from a 20 foot bluff to escape the Indians who had shot her in the shoulder and were intent upon scalping her. Mrs. Kirby was then Mrs. Terry.

The horror of the toll of life taken by the Indians has remained with the pioneer woman. She married again several years after the raid, and she has tried to make the best of life. Every calamity seems small when compared to the disaster which cost her so much, she declares.

"Just because the crops fail, or the cattle die, is no reason for anyone to be discontented. People of today should be happy and content because they can live in peace and security, and because they are not forever cursed with the dread of an Indian raid," said Mrs. Kirby.

"We were living in a tent located on a small hill about a half mile from Center Point, and had been there about a month before the Indian raid," said Mrs. Kirby. "My husband, Mr. Terry, was cutting timber to build us a home. One afternoon in January, while he was shaving shingles about 200 yards from our tent, he called me to bring him some tobacco. I started with it, but when I was halfway to him, Indians rushed out of the brush and shot him.

"I turned and ran toward my children, who were in the tent. However, the Indians reached the children before I did. They pierced Carrol, my three year old boy, with a lance, and crushed the life from my 6-week-old baby with a rock. I became crazed with fright and jumped from the bluff back of the tent, thinking that I would die with my family and cheat the Indians. One of the Indians' bullets struck me in the shoulder. Later I counted nine bullet holes in my dress.

"The jump from the bluff, by some miracle, failed to seriously injure the fear-crazed woman. She made her way to the home of a neighbor, and gave the alarm. A party of men set out immediately for the scene of the murders. The Indians were gone, and had taken with them the little girl, Martha. Joel, 18- month-old child, was found alive in the tent. He was rushed to his mother and her care had much to do with the saving of his life. Joel is now living on a ranch 10 miles south of Leakey, in Real County.

A company of heavily armed men set out, hoping to recover the stolen girl and exact vengeance for their bloody crimes. The pursuers learned that the Indians had also captured Jack Hardy, a negro boy of the Center Point community. Riley Van Pelt, who lives in the neighborhood of Rio Frio, while then only a small boy, remembers the incident and relates the story of the pursuit. The little girl was brought to the house, where she remained until the men could rest sufficiently to take her home.

"Hardy, the negro boy, who was also captured by these Indians, used to live at Center Point, and he has told me about the raid. He said that he saw Mrs. Kirby jump from the bluff and he thought that she could not possibly live. When the Indians neared the Rio Frio settlement with two Indian guards to herd the stolen horses on a hill, while the others went down into the valley after more hores, Hardy succeeded in slipping away from his guards while they were interested in watching their companions below.

"While crawling through the brush, Hardy said that he heard the crackling of a twig, and prepared to see one of his captors, but he looked up into the satisfied countenance of an old milk cow." continued Van Pelt. "he succeeded in reaching some men below in the field, who organized a searching party and overtook the redskins."

Bill Pruitt, who lived near the Leakey Settlement, and John Patterson, were in the party of white settlers who overtook the Indians, and both glimpsed the girl at the same time. Both started after the Indian behind whom the captive was riding, and pressed him so closely that he knocked the little girl off as he abandoned his horse and plunged into the brush. After seeing the girl, the men followed the redskins some distance, but found only a trail of blood, and a bloody blanket, filled with bullet holes.

The girl was kept at the Van Pelt place for several days, and, since the general belief among the settlers was that the mother had been killed, she was taken by one of the men, whose intention it was to adopt her.

"The raid occured in January," said Mrs. Kirby, and l did not get my daughter back until some time in April. People living near Rio Frio thought the negro boy knew what he was talking about when he told them I was dead, so they would not give my little girl to me at first. She was with the Indians eight days, and people who helped to capture her kept her for the rest of the time until she was returned to me."