INDIAN MASSACRE OF THE BROWN FAMILY 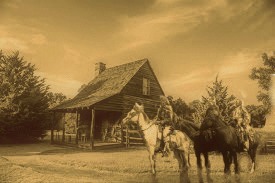 By T. U. Taylor, Dean of Engineering, University of Texas (Nearly all the facts in the following account have been obtained from Joseph Shotwell Brown, Professor of Mathematics in the San Marcos State Teachers' College.)

At the banquet of the fortieth Reunion of the first graduating class of 1880 of the Sam Houston Normal College at the home of the President, Harry F. Estill, in June, 1920, Professor Brown related briefly the events of this Indian raid and I have finally obtained his consent to chronicle the details for permanent preservation.

At the time of this raid I lived in Parker County, perhaps twenty-eight miles from the scene of this disaster. Professor Brown and I met for the first time, however, in the fall of 1879 when we were students of the Sam Houston Normal at Huntsville, Texas, sixteen years after the murder. I had heard of this Indian raid often but it was many years later that I met one of the survivors. Just after the war I went from my home on the Bear Creeks in Parker County to Littlefield's Bend, and crossed Patrick's Creek near the scene of this terrible Indian massacre.

At the time of the murder the family consisted of father and mother, Mr. and Mrs. F. C. Brown, seven girls, Sarah aged sixteen, Martha aged fourteen, Jane aged twelve, Bettie aged ten, Moie eight years old, and Essie and Tennie who were twins in arms. Joseph Shotwell, four years of age was the only boy. The family had come from Maury County, Tennessee, with a party of emigrants to Collin County, Texas, then to Palo Pinto County, but finally located in Parker County, eight or ten miles from Weatherford on Patrick's Creek. The nearest neighbors, the Gatlin family, lived about three hundred yards away, while it was half a mile to the home of Ike Welch. At the time of the massacre, the father. F. C. Brown, was in the Confederate Army where he had been for the past year and a half. On August 12, 1863, about noon, the shouts and cries of an approaching band of Indians were heard. By the time that the Indians came in sight, the mother and all the children, except little Joe, were on their way to the nearest neighbor, the Gatlin home. Joe was at the creek playing with a neighbor boy (Ike Welch) where his mother and father were washing wool. At the time the alarm was given, Ike and Joe were playing quite a ways up the creek. Ike's mother was seen coming hurriedly toward the boys, her long black hair was streaming down her back and as she cried excitedly. "Come on Ike ." They ran up the creek and Joe wondered vaguely what it was all about. Left alone, he started toward the Brown house and soon heard the war whoop of the Indians. At first he thought it was the neighbor children playing, for he did not discover the Indians until he was within fifty yards of the house. He turned as quickly as possible and ran toward the creek, but the Indians had seen him and two of them pursued him. Small as he was he realized that he must hide somewhere. The creek was nearly dry, but he ran a short distance along the creek and darted under an overhanging rock that jutted out from the bank. The two Indians passed and he heard them talking but they did not discover him. He stayed in his hiding place until dark.

Meanwhile, the two older sisters had gathered up the twins at the first alarm and had fled towards Mr. Catlin's. The mother was running with the other children when she made inquiry about one of the small children, and it is supposed that she thought one child had been left behind for she turned and went back into the house which was by that time completely surrounded by Indians. She was seen to enter the house, to return to the outside for a minute, and later to start again towards the Gatlin's. However, she was not allowed to go, but was shot with nine arrows there in the yard, and was finally clubbed to death with the butt of a rifle.

All of the girls reached the Gatlin home and assisted in barricading it as best they could. When the Indians finished ransacking the Brown home they went to Gatlin's. There were fourteen women and children in that one house, these included the Brown and Gatlin families and some visiting girls, the men being away. A low rail-fence surrounded the place. With terrible war-whoops the Indians came racing to the Gatlin house, jumped the fence, rode round and round in the yard yelling as they went, and finally stopped in front intent upon murdering all that were in the house. But the sister, Martha, who was only fourteen years old, had found an old gun barrel the stock of which had been broken. With this in hand, she planted herself at the door, changed her voice to imitate that of a man, talked to the leader through a "port-hole'', and told him that if he got down from his horse she would "blow his brains out." The leader consulted with his men, they rode around the house again, and with another war-whoop jumped the fence and were gone. The strain had been so great for Martha that she collapsed and it was several days before she was again herself. It was her clever ruse which had saved all those women and children.

The little sister Betty was captured by the Indians but somehow she escaped from them and she returned holding an arrow which she had drawn from a wound in her own flesh. Sarah, the oldest sister, was wounded twice in the back while she was running with one of the twins in her arms, and an Indian, not satisfied with having inflicted that much pain, ruthlessly broke off both of the arrows, leaving the points buried in her flesh. She never recovered from these wounds and died within two weeks. One of the twins, Essie, also died in about two weeks for she would not take nourishment. The result of the raid were that the mother and two sisters were killed and the home entirely broken up.

When the father was informed of the terrible tragedy that had befallen his family, he asked for a furlough so that he might go home to arrange for his children. Gen. Bankhead refused to grant the furlough. Mr. Brown then told him that he would leave camp in spite of all military regulations, and that he would go that night on the best horse that the camp could provide. Mr. Brown also informed the pickets of the hour that he planned to leave, in order that they might have their backs turned at that time if they so desired. At the appointed time he rode past the pickets without being halted. When the father reached home he found the children scattered among the neighbors who, with true western kindness took care of the motherless children. The neighborhood had at last been aroused and had driven away all the Indians but, so far as is known, none of them were ever brought to account for the murder of the mother, nor for the killing of William and Stuart Hamilton, sons of Reverend John Hamilton of the Christian Church, whom they had killed on the morning of the same day at a tanyard on Patrick's Creek, a mile or so below.

As soon as the father had arranged for his family he returned to camp. True to form, General Bankhead called him up for court-martial, asking him, "What is one man's family to the whole Confederacy?" He even threatened to have the father tied up by the thumbs, but sentiment in camp was so strong in favor of Mr. Brown that his punishment was lightened and he was placed in the guard-house for a term. He told General Bankhead that later when the war was over, they would meet on an equal footing and that then an account would have to be rendered for his lack of mercy. However, that meeting never came about for General Bankhead was killed on the streets of Memphis, Tennessee by another man who had served under him during the war.