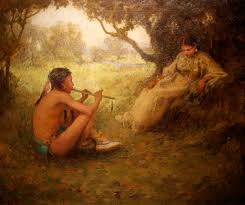 Indian Music While the music of the American Indian is not, as often suggested, a part of American folklore music, it is nevertheless the oldest form of musical expression known in America.

Existing before the coming of the white race, it was crude and primitive and barbaric when first heard and primitive it has remained, in spite of the influences of the Jesuit missionaries and the secular forces of civilization.

But the charm of Indian music surpasses its musical content, and has long challenged the greatest composers to the harmonizing of its thin, sweet melodies and insistent rhymes. Edward MacDowell, greatest of American composers, based his "From an Indian Lodge" on an original Indian theme.

Thurlow Lieurance, who lived among the Indians and had been formally adopted into a tribe and given an Indian name, contributed many rare and interesting songs based on legendary and actual music of the red man. Each song is carefully annotated and the music seems entirely logical to the experience.

Charles Wakefield Cadman composed much music in the Indian "mood." Frankly measuring the reactions of this vanishing race to the familiar emotions of the usurper, Cadman succeeds in expressing a delicacy of sentiment and heroic strains with unfailing emphasis and charm. But Cadman's music is, nevertheless, Indian music translated from the Indian as he is into the Indian he is believed to be.

For the Indian music differs from all other music in that it is essentially music of worship, save in the instances of mourning or love-making, and the fiery urge to make war against an enemy.

The Indian worships nature, every phase of which, to his mind, represents a manifestation of "the Great Spirit." The first Indian whose chance blow against the hollowed trunk of a tree believed that the "voice of the forest" spoke to him as an entity, a soul malignant or beneficent. And he worshiped that voice and endeavored to reproduce it in his rituals.

The first drums were made of hollow logs, covered with the skin of a wild animal, and beaten with a club padded with skin. Other forms of the drum were the skulls of enemies, with the tops cut off and replaced by membranes of animals. On this he made horrible but satisfactory music to his victorious ears.

Likewise the Indian who listened long to "the voice of the rain" strove to conciliate this force of nature necessary to the growing of crops and preservation of the lives of his people by making rattles of dried turtle shells, strapped together over dried beans or the claws of animals.

"The voice of the feathered spirits," represented in the song of the birds, was reproduced by the means of flutes, the first being two pieces of rounded cedar fastened together to form a tube and blown in at one end. Thurlow Lieurance made a collection of Indian flutes which will be preserved by the Nation. Many of them are made of cunningly wrought woods, and from stone, laboriously bored out and carved in intricate patterns.

"The voice of the wind" is fittingly represented in the shrill or deep-toned chanting of men and women, while to the silent deities, the sun, moon and stars, ritualistic chants at once impressive and awe inspiring.

The Navajo Indians have passed down through the ages a series of invocations to the rising sun which possess dignity and exquisite tonal value. These have been carefully collected, and Charles Wakefield Cadman is now arranging them in form for solo, chorus and orchestra.

While at Taos last summer the writer paid a visit to Snow Deer, a famous Indian artist, whose paintings are being eagerly collected by connoisseurs from all parts of the country, in search of a drum which possessed a "history," and Snow Deer promised to procure it.

A fragment of an Indian song recently heard sung at an Indian fair in Santa Fe was thoughtlessly hummed. Picking up a small drum, made of a discarded cheese box, over which a skin was stretched, with throngs of leather serving as "hand holds," Snow Deer said:

"That is a most sacred song, but sometimes men of other tribes sing it as a drinking song in derision of those who use it only in the kiva! "

(The "kiva" is a sacred house of the Indians, dug deep into the earth like an inverted cone and entered only by means of a long ladder).

Snow Deer, tapping the drum lightly with his fingers, then sang under his breath a song in quick rhythm with words which sounded as follows:

Inside the tiny pueblo the eyes of the watchful Indians gleamed like agates. From the low opening, but across the valley, through which a creek runs at mad pace to the four-storied pueblo where many Taos families live like bees in a honeycomb, on the flat roof a slender Taos woman, wrapped like an Egyptian in a long black shawl, stood motionless, silhouetted against a crimson sky..

The Indian song depends largely upon pitch for its understanding. In the "love calls," the pitch is slightly flattened to express emotional excess. In the "war songs " the music is sharpened as the song and dance take on intensity, until it finally becomes a series of "yips " or animal-like cries, which are indescribable.

Watching the Indians perform the Apache war dance (forbidden except in exceptional instances) and hearing the wild, fierce syllables rising to falsetto, one feels his hair rising involuntarily from the scalp and suffers a sort of vicarious scalping in sensing the more realistic emotions of the forefathers to whom the music came not as a diversion, but a foreboding.

The Indian almost never sings without dancing, and never before spectators. That the Indian mother sings her lullabies and that the lover plays his plaintive "love calls" on a flute we know from accurate account. But even the songs of mourning, sung by the women alone, are slow, veiled accents accompanied to a dismal series of movements or steps.

When a dance is about to begin in. the long street of an Indian village the signal is given from the kiva by raising a pole on which is hung feathers, skins of animals and sacred emblems of the tribe. The musicians carrying the drums come first, and take their positions. Then the warriors, with the women of the tribe (each woman walks two paces in the rear of the men) march in orderly procession to the beating of the drums. Beginning with a deep, guttural note, endlessly repeated and very resonant, the song is taken up by one drummer and then by others, until the selected chorus fires the dancers into movements which quicken into frenzied pounding of the earth with the bare feet and the rattling of turtle shells tied under the knee joint.

Persons hearing the drum beats from an Indian village during the progress of an Indian dance, which begins early in the morning and ends at sunset, often find their nerves becoming rasped and frayed with the insistent rhythm until they literally fly from the sound of the music. This reaction is quite involuntarily, but so well known that Eugene O'Neill employs it with terrible effect in his play "Emperor Jones." The association of drum beats and heart beats can not be explained except in terms of race consciousness, dating back to a time when man lived in physical terror of his life.

A song of combat is represented by four symbols, first, the sun, source of light and knowledge and indicative of vigilance; second, the warrior pointing to the heavens and the earth, signifying power and dauntless prowess; third, hidden behind the moon, symbolic of secrecy and craft, and fourth, the warrior, personifying Venus.