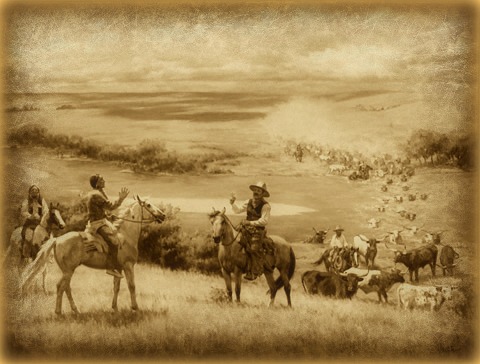 One of the early settlers of Tom Green county, Texas, was Eugene McCrohan, who located in that region in 1866 and lived there for more than a half century. Some years ago McCrohan gave the following account of a Texas tragedy in those days, which has almost faded from public memory. He said:

`"In the spring of 1867, while a company of United States soldiers of the Fourth Cavalry was yet stationed at old Camp Charlotte, at the mouth of Kiowa Creek, on the Main Concho, Jim Ketchum started a large herd of cattle for New Mexico. At that time the government had rounded up and held as prisoners at Fort Sumner, New Mexico, seven thousand Navajo Indians. These Indians had to be fed, and in order to do this a heavy draft on the Texas ranges became necessary and Texas beef cattle commanded high prices when delivered in Fort Sumner. At the same time Ketchum started his herd from the Concho river, others set out for the same destination with herds, large and small, I being one of the number. We drove our herds slowly, and in the fall we reached the Hondo river, about where Roswell, New Mexico now stands, and finding water plentiful and range excellent, we wintered there.

"The next spring we drove to Fort Sumner, where sales were made at satisfactory prices, and prepared for our return to Texas. Among the outfits preparing for the return trip were those of Jim Ketchum, Sam Gholson and others, and to insure safety against Indians during the long journey it was proposed that we all travel together. Ketchum with two of his friends were ready to start, while the others had not quite finished making preparations for the trip. Pleading urgent demands for his presence at home on the Concho river, and maintaining that he and his men were able to cope with any opposition the Indians along the route might offer, Ketchum and his party started some two or three days in advance of us. If I remember correctly, he had no wagons, and being encumbered with only a small amount of baggage, he depended altogether on one or more pack animals. His most valuable possession, however, was the money which he had received in payment for his cattle, amounting to several thousand dollars, and from what I afterward learned, most or all of this money was in greenbacks, or United States currency.

"In the meantime I had bought two large wagons, known in those days as `Santa Fe' or `Murphy' wagons, with three yoke of large steers to each wagon, and with this outfit my party of five men took up the line of march for home. We had to content ourselves with the sluggish movements of our ox teams, and hence traveled slowly, but as it so happened, we kept within three or four days’ travel of Ketchum's party.

"Everything had gone fairly well with us until we reached the Mustang Water Hole, near the headwaters of the Main Concho river, where we camped overnight. The next morning as we resumed our journey, Joe Warner, a member of our party, went out to kill a buffalo. In a very short time he came back at great speed, yelling at the top of his voice, `Indians! Indians!' However, when he reached our little wagon train, he admitted that he had not seen any Indians, but said that while riding, looking out for game, he had come upon the body of a dead man, evidently murdered by Indians. Two or three of our party volunteered to return with Warren for the purpose of investigating, and they soon returned about as badly shaken up as the man who first made the discovery. They declared that the country was `full of Indians,' and urgently insisted that we make no halt, but to keep moving with all speed and get away from there as soon as possible. They had found, first the body of Jim Ketchum, then that of one of the McDonald boys, and a little further on they had come upon the corpse of a man named Comperry. They had not touched the bodies, but turned away and fled in order to bring us the news of their discoveries.

"On receipt of this intelligence, we called a halt and went into camp. One or two of Gholson's men were sent post haste to Camp Charlotte, and in response to their call, Captain Renderbrook, Company H, Fourth Cavalry, sent a detail under Lieutenant Hemphill, to the scene of the tragedy. Of course, by this time the Indians had decamped and were far away, and it only remained for the soldiers to gather up the bodies of the murdered men and give them decent burial where they were found.

When the soldiers reached the place where the men had been killed they found the ground littered with fragments of United States currency—greenback bills of various denominations. Evidently, this was the money, or part of it, that Mr. Ketchum had received in payment for his cattle, and the Indians, not knowing its value, had torn the bills to pieces and scattered the fragments to the winds. These fragments were gathered up carefully and afterwards delivered to Mrs. Ketchum, who forwarded them to the Treasury Department at Washington for redemption, but with what success I never learned.

"All signs and indications showed that Ketchum and his party, while traveling, had come upon a large band of Indians; that the Indians attacked them, and that in order to escape immediate assassination they had sought the shelter of a small arroya near by, where, evidently the attack was concentrated, and where their bodies were found. The final stand of the white men was in a depression at the head of this arroya. Here, it seems they were protected on all sides save at one point, where a small hackberry tree stood, and this point overlooked and commanded every foot of Ketchum's position. The Indians, apparently, soon discovered this vantage ground, and crawling up under the meagre protection afforded by this small hackberry, poured a deadly fire upon the three men in the arroya, keeping it up until the last man had fallen. How long the fight lasted will never be known, but all signs indicated that the unequal struggle was of long duration. Ketchum and his companions were well supplied with ammunition; their guns were of the best make, and the men behind them were strangers to fear. They concentrated, their fire upon the hackberry with such accuracy that the tree was actually cut down close to the ground, and the bloodstains at and near the base of the tree, showed that quite a number of the savages were wounded or killed by the Texan's guns.

"A short time prior to the killing of Jim Ketchum, or soon thereafter, another one of the Ketchums, a brother probably, was murdered by Indians while in camp at Salt Gap, now in McCulloch county, near Melvin. This Mr. Ketchum and two companions were turkey hunting in that vicinity, and had evidently been discovered by a party of prowling Comanches. Ketchum and those with him, not suspecting danger, had gone into camp for the night, and at a late hour the Indians crawled up and fired on them, fatally wounding Mr. Ketchum while he lay asleep on his pallet. The two men with him, both of whom had also been wounded, agreed to stay by him and offer such defense as was in their power, but he told them it would probably prove a useless sacrifice of their own lives, and urged them to leave him and save themselves, saying he had but a few hours to live. The two men made their way on foot to the Ketchum ranch, near the mouth of Brady creek, and reported the attack; a relief party was immediately sent out. When the relief party reached Salt Gap, they found Ketchum dead, and that the Indians evidently had departed immediately