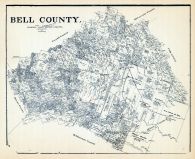 THREE YEARS after the organization of Bell county and in the fall of the year 1856, there was a decided movement of the Mormon Church in Salt Lake City, Utah, to gain converts to the Mormon faith, and in accordance with this decision, after a report of local conditions in Texas to the Mormon Bishops in Salt Lake City, it was then decided to establish a settlement of Mormons in the western part of Bell county, and a company composed of twelve or fifteen Mormon preachers were delegated to begin this colonization scheme to the everlasting glory of Brigham Young and his satelites.

In the early part of September these advance advocates of the Mormon religion reached the frontier town of Belton, which was then composed of a stage station and some ten or twelve stores, of which about half were saloons and gambling houses, and took up their residence temporarily on the banks of Nolan creek just west of where the courthouse now stands, and after resting for a few days, the Elders got down to business and sent out parties of two each into the different settlements of the new county to gain converts to the Mormon faith ostensibly, but in fact to get all the likeable young women wherever possible as converts to the faith and later as wives for the glorified church dignitaries in Salt Lake City.

Everything worked nicely for a few weeks with the new settlement, the Elders being away for several days at a time from the local camp, but in the meanwhile a report was circulated among the permanent residents to the effect that the Mormons had been making strong appeals to the wives and daughters of the Gentiles to abandon their homes and take up their residence in Utah, where the true faith abounded.

This latter development failed to meet with the cooperation and hearty approval of the male Gentile element in Belton and surrounding territory, and a committee composed of leading citizens backed up with an assortment of firearms called on the Mormons, telling them that if they wanted to keep their ranks intact and their present good state of health that it was absolutely necessary for them to move elsewhere. After taking one good look into the stern faces of this committee, the Mormons loaded their personal effects into several ox wagons and left Belton, later taking up their encampment at a place on the Lampasas river now known as the McBryde Crossing, five miles west of the present village of Youngsport.

This community was sparsely settled, but several families of pioneers had settled on this part of the river several years earlier, and among these was a family by the name of Howard, who had a grown daughter and two or three boys nearly grown. As before, when the Mormons carne to Belton, everything moved along nicely and the new settlement was accepted at its face value, until Howard noticed that the Elders were paying quite a little attention to his daughter. After making some investigation and finding that the Mormons were trying to induce her to leave home, Howard loaded his shotgun with blue whistlers and called on the Mormon settlement, and in no uncertain terms told the Elders to leave his family out of all their future plans and calculations, and all would be well with them, but failure on their part in complying with all the terms of his demands, that he would kill them all to the last man.

The Mormons personally took him at his word and assured him of their good intentions, but in the meantime they had gotten in the good graces of a settler by the name of LaNier, and it is on this man that the story hinges, for LaNier told the Mormons if they wanted the girl that he could induce her to leave with them, so he called on the girl with this intention in view. The girl evidently told her father of what was on foot, at least he found out LaNier's intentions and told him to leave the premises and to stay away if he placed any value on his life.

Several days after the heated conversation with LaNier, Mr. Howard decided to round up his cattle which were ranging in the old Crossville settlement, and with this intention in view, saddled his horse early one morning, laid his gun across his saddle and left home with the intention of being away the entire day. He rode to where the cattle were ranging and began the round up, when some sixth sense warned him that his presence was needed at home, so acting on this impulse he left the work to be done in the hands of other parties and rode home with all possible speed, and as he came in view of the house, he saw LaNier's horse tied to the fence. Howard dismounted and entered the house from the rear just as LaNier, badly frightened, made a plunge through the front door and tried to mount his horse, when he recieved two loads of blue whistlers in his back, which killed him instantly.

There is no doubt in the minds of fair minded people that LaNier had gotten his just deserts for the despicable part he had played, and a few years earlier, before Bell county had been organized, when each man was his own judge, jury and executioner, nothing would have been done or thought about the killing, but Howard, fearing arrest if the tragedy became known, decided to dispose of the body, and accordingly called on his sons to aid him. They loaded the body across a pack horse, covering it with a tarpaulin and rode toward the west, which was the last ever seen of LaNier.

As people were frequently changing locations and long absences were more frequent than otherwise, nothing was thought of LaNier’s disappearance for several months, until the news leaked out that LaNier had been murdered and a search was instituted for his remains, a party being organized for this purpose, but with no results as far as finding his body was concerned. The searching party did, however, find a place where a huge fire had been kindled at the base of a mountain, which now bears the name of the man who was killed. and a few bones badly burned were found, but it was never definitely proven that they were human bones.

Several months after the searching party was disbanded, Howard was arrested for this murder, and after the usual legal delay was brought to trial in the District Court in Belton, and as the prosecution could not actually prove that a murder had been committed, inasmuch as a dead body had never been produced, Howard came clear and his case went on the criminal docket as the first murder trial ever held in Bell county.

After the murder trial the Mormon settlement finally dwindled to a few members, a few returning to Utah. Some died from disease and the rest remaining at the encampment until one dark night a shotgun roared out of the stygian darkness, and the Mormon encampment was no more.

Nothing remains of this encampment at this date, even its exact location has been forgotten and time has obliterated even the graves of those that died that night seventy-two years ago, and there is not a half dozen people living today that ever knew there was a Mormon settlement on the Lampasas river.