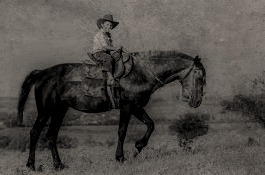 IT WAS back in the late sixties, when a line of U. S. Army Posts, stretching across the Frontier of Texas, from the Rio Grande to Red River, marked the line of the outside settlements. These posts ranged from fifty to sixty and eighty miles apart, leaving plenty of room for hostile Indians to get by and depredate on the thinly settled country east of the posts which they took advantage of in the light of almost every moon; often committing depredations as far as eighty miles east.

In the settling of frontier counties many incidents happen that are stranger than fiction. Prominent among these incidents is the disappearance of the Ledbetter boy.

The ranches east of the line of posts ranged from ten to forty miles apart. A number of these ranches would club together, hire a school teacher for a four-months term and put all of their children together at the most convenient ranch for a term of school. It was at Lynch’s ranch', twelve miles east of Fort Griffin, that such a school was being taught, and among the pupils were the two Ledbetter boys, six and nine years old.  After school one evening the children were out in the woods gathering some wild berries.  A storm came up, and they ran back to the ranch.  Soon someone said, "Where is Johnny Ledbetter?'" And now, fifty-eight years later, the question among the old settlers around Fort Griffin is, "Where is Johnny Ledbetter?"

Ranchmen far and near were in the saddle, scouring the country, hoping to relieve a distracted mother with favorable news from her lost child; the rain had erased all signs of trails, only the faint impression of barefooted pony- tracks could be seen in the vicinity of where the child was last seen. The Tonkaways, a small tribe of friendly Indians, (who were of great service to the settlers as trailers of bands of hostile Indians, who raided the country every full of the moon) were sent for and after a close inspection of the few visible pony tracks said "Dam Comanches, heap got him boy-."

Years went by and no tidings from the boy, neither word nor trace. There were no railroads in the country at that time, the cattle trail running north up this line of posts was the outlet for all of the Texas cattle, hundreds of herds going over this trail every season with hundreds of thousands of cattle, the number to the herd ranging from around eight hundred to five thousand.

A young cowboy around 17 years old, with one of these herds, got hurt by a wild horse near Fort Griffin, and could go no farther. A rancher's wife, Mrs. Jackson, kindly took this boy in and cared for him until well. When she asked his name he said "Buckskin Bob " was the only name he knew. He was a very bright boy and this kindly lady took a great interest in him; he gave her the history of his life as far back as he could recollect. He said the Indians came into Devil's River Canyon with him and traded him to an old hermit who went by the name of Tiger Jim. That old "Tige" gave them a pony and a pistol for him; he said he could not remember where the Indians got him, but that they traveled a long ways with him and tied him to a stake at night while they slept.

Mrs. Jackson knew of the disappearance of the Ledbetter boy and with some hope that "Buckskin Bob" might be the missing child she sent word to the Ledbetter ranch about this boy. The parents of the lost child went at once to see him and after talking with him the mother fully believed it was her child, but the father was not certain. The boy went home with them. Some of the neighbors thought there was a family resemblance, others thought different. The boy apparently could not remember any further back than being with the Indians, and in telling them of incidents of early recollections he said that while in captivity something got wrong with the sun and the Indians smoked a piece of glass and looked at the sun through it. When asked the size and shape of the glass he described it, and Mrs. Ledbetter went straight away to a bureau drawer and brought forth a piece of smoked glass conforming to the description given by the boy. Both she and her husband remembered the incident of smoking the glass to look at the sun while in eclipse.

Mr. Ledbetter was a cattleman and had large corals near the house where his cowboys branded the cattle. Mrs. Ledbetter remembered that the children while playing "branding cattle" had tied John down and stuck a hot iron to his hip and that the would-be calf bawled with pain; she went out and found Johnny tied hard and fast, with a burnt hip, and the would-be cow punchers had taken to their heels. "Buckskin Bob" showed that scar, and the long lost child was surely believed to be at last found.

Getting back to "Tiger Jim" (Old Tige), the boy said he never told where he came from, nor how long he had been there, he only said he was there first.  He made a trip into the frontier trading posts once every six months for supplies, a distance of one hundred and fifty miles, Each time he would bring back a jug of whiskey and would be half drunk as long as it lasted. He had an old chest in his cabin and he kept it locked, except while on these sprees he would open it and get out a picture of a girl and something that looked like a bridal veil, and fondle them and weep over them.

That is all "Buckskin Bob" knew of the former life of his foster father.

Use coupon code "half-off" at checkout!

There was also a gang of outlaws which rendezvoused in the canyon at that time. They stole horses in New Mexico and drove them across the plains and sold them in Texas, and they kept loot in one of the many caves in the side of the Canyon. This was long years before the telephone was thought of, yet strange to say, this boy told of them having a wire stretched down the canyon whereby they could notify each other if any stranger or band of Indians came in. "Tiger Jim " was not a member of this band, nor had anything to do with their loot. The boy said that "Old Tige" had a bible and a dictionary and was a scholar. He had given this boy a much better education than either of the Ledbetter children had with their advantage of school; in fact, he was a much brighter boy than any of the other members of the family. This is all that is known of the history of old "Tiger Jim. " While he was off on one of these trips to the trading post "Buckskin Bob" made up his mind to see if Devil's River Canyon was all there was of the world. So he saddled his pony and with Winchester, pistols, and a few days' rations, he rode out of the canyon and headed north-east. He rode nights And kept tinder cover days, to escape hostile Indians, and finally pulled into a ranch on the South Concho River where they were putting up a herd of cattle to drive up the trail, and as before stated, he was injured and stopped at Fort Griffin.

But, "Buckskin Bob" was a wild colt that no man could tame. The family harness chafed him and all of a sudden Bob was missing. He went to the Indian Territory, stole a bunch of Indian ponies, crossed the border back into Texas and sold them and was caught with the balance. He was brought before a judge who knew, and was a friend to the Ledbetter family, and who knew the history of the boy. The judge took his promise that he would thereafter go straight and turned him loose, and "Buckskin Bob" lived up to his promise. He then went to Galveston, Texas, took a tramp vessel to South America and was there a year. On returning to Texas he attended the meetings of a noted evangelist, was converted, and after a few preliminary preparations, got him an organist and singer and went out as an evangelist himself. And he was a "hummer." His bible education with' "Old Tige" put "Buckskin Bob" around the top of the list as an evangelist.

He wrote Mr. Ledbetter from Ohio that be had come into possession of facts that led him to believe that he was not John Ledbetter, and that another boy had been stolen about the same time by the name of Wesley, and he believed himself to be that boy. He thanked Mrs. Ledbetter, for her kindness and told her he would ever remember her as a mother. She read the letter to me and wept, saying, "Still, he is my own lost child, John, and ever will be."

Where is John Ledbetter?