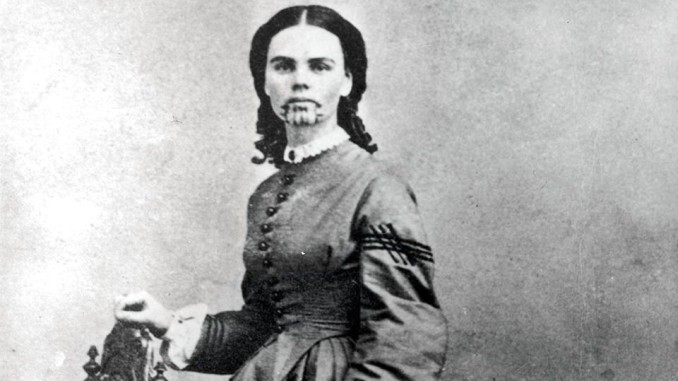 During the early days many outrages were committed by the Indians upon those emigrating into California, upon what is now Arizona soil. The Oatman massacre is one of the most notable of these occurrences.

This terrible massacre occurred at what is known as "Oatman Flat," about 100 miles east of Yuma, Arizona. Royce Oatman, with his wife and seven children, left Independence, Missouri, with a company of some fifty persons, in August, 1850. Part of the company remained in Tucson, and the rest at the Pima villages. Oatman left the latter place with his family in February, 1851, to make the trip alone down the Gila and into California. They were short of provisions and their cattle were in bad shape, consequently their progress was very slow. A man by the name of John La Count who had passed over the road several times, told them that he had encountered no Indians, and considered the road safe, which probably was the reason Royce Oatman undertook this perilous journey alone with his family. The party encountered no Indians until after passing what is now Gila Bend, and reaching the place now known as Oatman Flat. Here a party of Indians, 19 in number, armed with clubs, bows and arrows, came into their camp, and demanded food. Oatman protested, saying that he would be robbing and starving his children if he gave the Indians food, but he finally gave them some bread. They asked for more, which he steadily refused. Retiring a short distance, they held a brief consultation, and then, with savage yells, set upon their victims. All of the Oatman party was killed with the exception of two daughters, Olive, aged 16, and Mary Ann, aged 10, and a son, Lorenzo, aged 14. The latter, being taken for dead by the savages, was thrown over an embankment 20 feet deep, and left for dead. Finally regaining consciousness, he found his way back to the Pima villages and there joined an expedition into California. Olive and Mary Ann were held by their captors, the Tonto Apaches, for something over a year, when they were sold to the Mojaves. The price paid for them is said to have been two horses, a blanket or two, some vegetables and some beans, The youngest girl died while a captive among the Mojaves, and Olive remained with them in captivity for about five years. 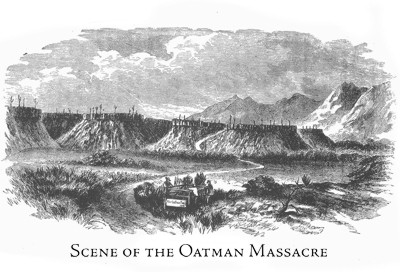 In the meantime her brother, Lorenzo, using every means at his command, was endeavoring to rescue his sisters from their terrible fate. In October, 1854, he went to Los Angeles intent on this object. He joined several parties of prospectors to search for gold beyond the Colorado, and one of the parties penetrated the country bordering on Bill Williams' Fork in 1855, without getting any trace of the captive girls. In December of that year he searched through Southern California for them, but with no success. He then tried advertising in the newspapers, and in this way succeeded in arousing public sympathy, and learning that his sister, Ohve, was reported to be a captive among the Mojaves, he preferred a petition to Governor Johnson of California, for ways and means lo recover her, which was signed by many people of Los Angeles county. The governor replied that he had no authority to grant the request, and referred him to the Indian Department. He prepared a memorial to the Indian Department, and forwarded it in the month of February, 1856.

During this time a humanitarian was at work in his behalf and in that of his sisters. There came  to Fort Yuma in 1853, one Henry Grinnell, a nephew of Henry Grinnell, the philanthropist who fitted out the Advance and Rescue for De Havne's search for Sir John Franklin's party in the Arctic Sea.  Grinnell was an humble carpenter, but took a lively interest in the fate of the Oatman girls, and questioned emigrants and Indians alike or tidings of them. One night, in January, 1856, a friendly Indian by name Francisco, came to him and asked him: "Carpenter, what is this you say so much about two Americans among the Indians?" Grinnell informed him that the Americans knew of two white girls who were captives among the Indians, and that unless they were surrendered, the whites would certainly make war upon the tribe. Pretending to read from a copy of the Los Angeles Star, in which Lorenzo had made his first appeal for assistance, and translating as he read, he told Francisco that a large army was being prepared that would annihilate the Mojaves and and all tribes that assisted them in concealing the captives. Francisco was much impressed. He remained in Grinnell's tent that night and the next morning Grinnell took him to Colonel Burke, the commander of the fort. Francisco said: "You give me four blankets and some beads, and I will bring her in just twenty days, when the sun is there," indicating about 4 o'clock in the afternoon. Colonel Burke thought it some trickery on the part of the savage, but Grinnell told him to give him the goods and charge them to him. The goods were furnished and Francisco departed.

The arrival of Francisco with his message to the Mojaves created no little consternation in their camp, and they ordered Francisco to leave and not to return under penalty of torture, but the Indian, after much persuasion and many pow-wows, succeeded in his mission. On the twentieth day, Grinnell, who, in the meantime, had been made the object of many jests by his comrades who believed that Francisco had cleverly worked upon his sympathies to the extent of the goods furnished him, was rewarded for his patience and faith in the Indian. At noon three Yumas appeared, and announced that Francisco was coming. "Is the girl with him?" asked Grinnell eagerly. "Francisco will come when the sun is there," replied the Indians, indicating the point that Francisco had indicated, and no more satisfaction could be had from them. As the hour indicated approached, Grinnell, watching with strained eyes, caught sight of three Indian men and two women approaching the ferry on the opposite side of the river. "They have come," he cried, "the captive girl is here." Olive, not wishing to appear in public in her scanty bark dress, was quickly furnished with clothing by an. officer's wife, and soon presented to the commander amid wild enthusiasm. Men cheered, cannon boomed, and the shrill whoops of the Yumas joined in the general acclamation of joy. 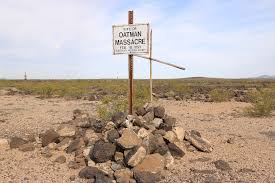 Two days after sending his memorial to the Indian Department, Lorenzo Oatman saw in the Los Angeles Star a brief statement of Olive's recovery. Hastening to the editor he was told the report was reliable, as it had been based on a letter from Colonel Burke. A friend furnished him with transportation and accompanied him to Fort Yuma, which place he reached after ten days' riding across the Colorado desert. The brother and sister were united and clasped in a fond embrace. Strong men wept, but their tears brought to them no dishonor. Brother and sister returned to Los Angeles, and went thence to southern Oregon to live with an uncle who had heard of their trials, and invited them to share his home. Afterwards they attended school in Santa Clara Valley in California, and in 1858 removed to New York. Francisco, the Indian, being held in high esteem by the whites, was made chief of their tribe by the Yumas. He was known thereafter as El Sol Francisco, was arrogant in his new station, but was always friendly thereafter with the whites.

In 1857 the Yumas and Mojaves organized a joint expedition against the Maricopas. They raised a large band and attacked the Maricopa villages about the first of September. They burned some houses, and killed some women and children, which was speedily avenged. The Pimas and Maricopas were reinforced by the Papagoes until their numbers were equal to those of the invaders. At Maricopa Wells, about four miles west of the present station of Maricopa, on the Southern Pacific, they fought a great battle, in which the Yumas were defeated with the loss of over 200 warriors. Out of the Yuma warriors only three returned alive. Francisco fell in this fight, killed, it is said, by his own men who thought he had brought disaster upon them by defending the whites.

Olive Oatman, it is said, died in an insane asylum in New York before or during the year 1877.