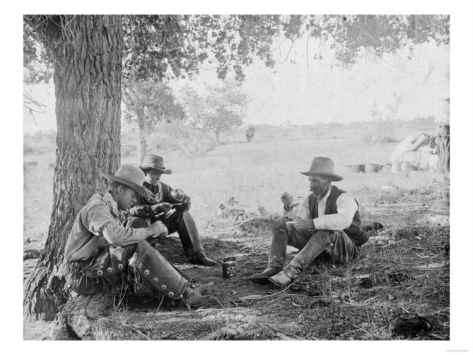 "There are memorable names connected with the early history of West Texas. I like to think and I like to talk of them. They were great guys, living in a great section of a great state. Just now I am thinking of a remarkable man I knew in boyhood. He had a great heart and a great mind. His name was Adam Bradford. He lived in the Menard area for many years, sweetening the people with honey, making them laugh at his wit, and meeting every obligation of a good man at all times.

"One day we were talking about the Southwest and its noble foundation pillars, and he reminded me that there were 'giants' among the early settlers. He recalled rugged, rough and tumble men who were at match for highwaymen, rattlesnakes, or anything else tough that roamed the sunset valleys when not a single man had his permanent dwelling between the wilds of New Mexico and the Concho river.

"At the time of my meeting with Bradford, he was 75 years of age and that was more than 50 years ago. He told me of a venture of his boyhood, which took place out on the lone prairie now more than 100 years ago. He went on some kind of a mission to Santa Fe, and was returning to West Texas when his party came upon a wagon load of negroes, seated around a fire eating some delicious looking 'beef steak.' His party was invited to dismount and have supper. They were hungry and readily accepted the hospitality. It was near sundown and they staked out their horses and made down their beds.

"Little did any of us think how in the midst of the desert those darkeys managed to acquire such nice meat," Bradford said. "But we didn't much care how they did. The main thing was that they did, and we would share it with them."

"The next morning Bradford arose early, and began looking for his horse. He saw the animal grazing back of a little thicket nearby and on reaching that thicket a ghastly scene was presented to his amazed eyes. A partly carved up Negro lay on the ground. He was horrified to think of having spent the night in such a camp. As far as I know that was the only evidence of human eating human ever recorded in Texas. I think it was a true story for no man ever accused Bradford of a falsehood. He came into this Western section as a boy and lived to a ripe old age among the people who honored him with their confidence."

The parents of the editor of Frontier Times moved to Menardville in 1884. Adam Bradford was living there at the time, and he died there in 1902 or 1903, at the ripe age of 89 years, honored and respected by everybody in Menard county. The writer has heard him relate many of his thrilling experiences with Indians. In regard to the "nigger" episode, Mr. Callan does not mention that when Bradford and his companion made the gruesome discovery, which indicated that "nigger meat" had been served, their rage was furious and the three negroes in the camp paid the extreme penalty for their cannibalism.